I thought I’d started this cowl maybe last autumn, then I checked on my Ravelry account   and OH MY GOODNESS… that can’t be right can it?

Ahhhh…but my issues with my hand had started that spring, and I would imagine this second Cozy Cowl was another hoping-for-a-miracle make which I could crochet pain free. I think we both know the answer to that one!    

I wonder if I blogged about it way back then? Hang on I’ll just have a look… 

…there’s a little mention on a post from 5th December Yearning Along It’s actually quite a sad reminder of how adrift I felt being told not to do any craft, this turned into months and months. I notice that I optimistically still tried, then accepted the situation, and so that’s why the cowl languished for a few years.

Anyway back to feeling buzzy and happy, because here we go: 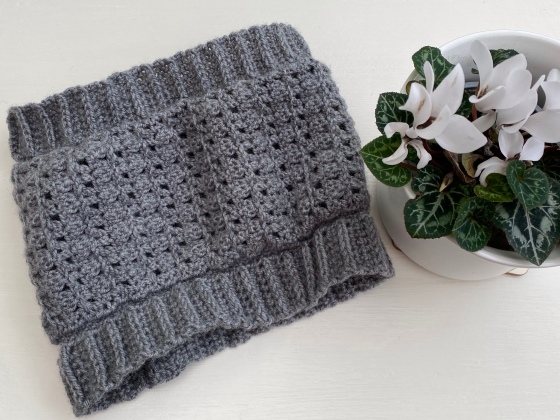 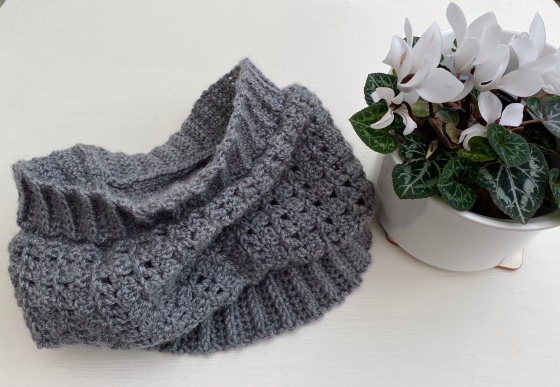 I really like Stylecraft Life Aran; it’s a good mix of wool (25%) and acrylic (75%), which works up well with a 6mm hook. It’s definitely cosy when turned into a cowl.

Pattern details for the cowl are on my Ravelry project page above. I had borrowed the book from the library, when I made the first cowl for a friend way back in May 2016! It was to keep her neck warm when she rode her motorbike.

This time I still didn’t make it in one piece; because I really like the way the ribbing looks. I added a row of double crochet to each edge of the body of the cowl and one side of both ribbed strips, then crocheted them together. This was far more satisfying than sewing. I have a feeling it might be a stronger join too.  I single crocheted into the inside loops only which made a smooth seam.

I wonder who will end up wearing it?

The Big Issue North recently requested knit and crochet hats, scarves and gloves on Twitter, to keep their magazine vendors warm. The Big Issue North is a well respected charity, have a look at what they’re about here. There’s some interesting articles on the website.

I usually buy the The Big Issue magazine if I come across a street vendor, I have done for years. It’s not pure altruism as although you know you’re helping someone, you’re also getting a good quality read. (Big Issue North is actually a separate organisation to The Big Issue down here, the same premise but BI North have been independent since 1996. It’s all good stuff.)

If you have any spare knit or crochet accessories I know they’ll be gratefully received. It’s cold now.

This afternoon I made a decision to finish the Sleep Under the Stars blanket. It’s lovely and squishy. The yarn is soft and great to crochet. I’ve enjoyed working on it. Crochet is sporadic, because otherwise it’s just too uncomfortable to do much of anything without discomfort for days afterwards. Dratted hand, but never mind it’s just the way things are and at least I can still do a bit and not zero. So that’s fine. It has to be, doesn’t it?

It’s now a nice warm lap size blanket for an adult, or a good sized blanket for a baby to snuggle under. I hadn’t really thought about it one way or another, but this afternoon I found myself thinking that I’d do one more round then darn in the ends. And that was it!  

Of course it means I’ve got quite a few balls of lovely chunky Paintbox yarn to use on something else, however my plan is now to work through things I started agessss ago. I think this working through means to either undo or finish them. There are definitely a few things lurking that I know I’m not interested in wearing, or making any more. At my current speed this might take the rest of the year and perhaps till Easter next year! Depends how many I abandon…I could go ballistic in an unravelling sort of sense. That’s a dodgy looking sentence and no mistake. I’ve obviously been reading too much Engleby lately (I can’t put it down. There have been a few books like that since May when my reading and concentration picked up again.)

No worries either way – crochet is not about speed or productivity anymore. It has got to be about making things I really want to make. I just decided on a whim that I didn’t really need a full-sized star shaped blanket after all, and a happy byproduct of this is that I get that old whoosh of relief and happy feeling of having completed something nice. 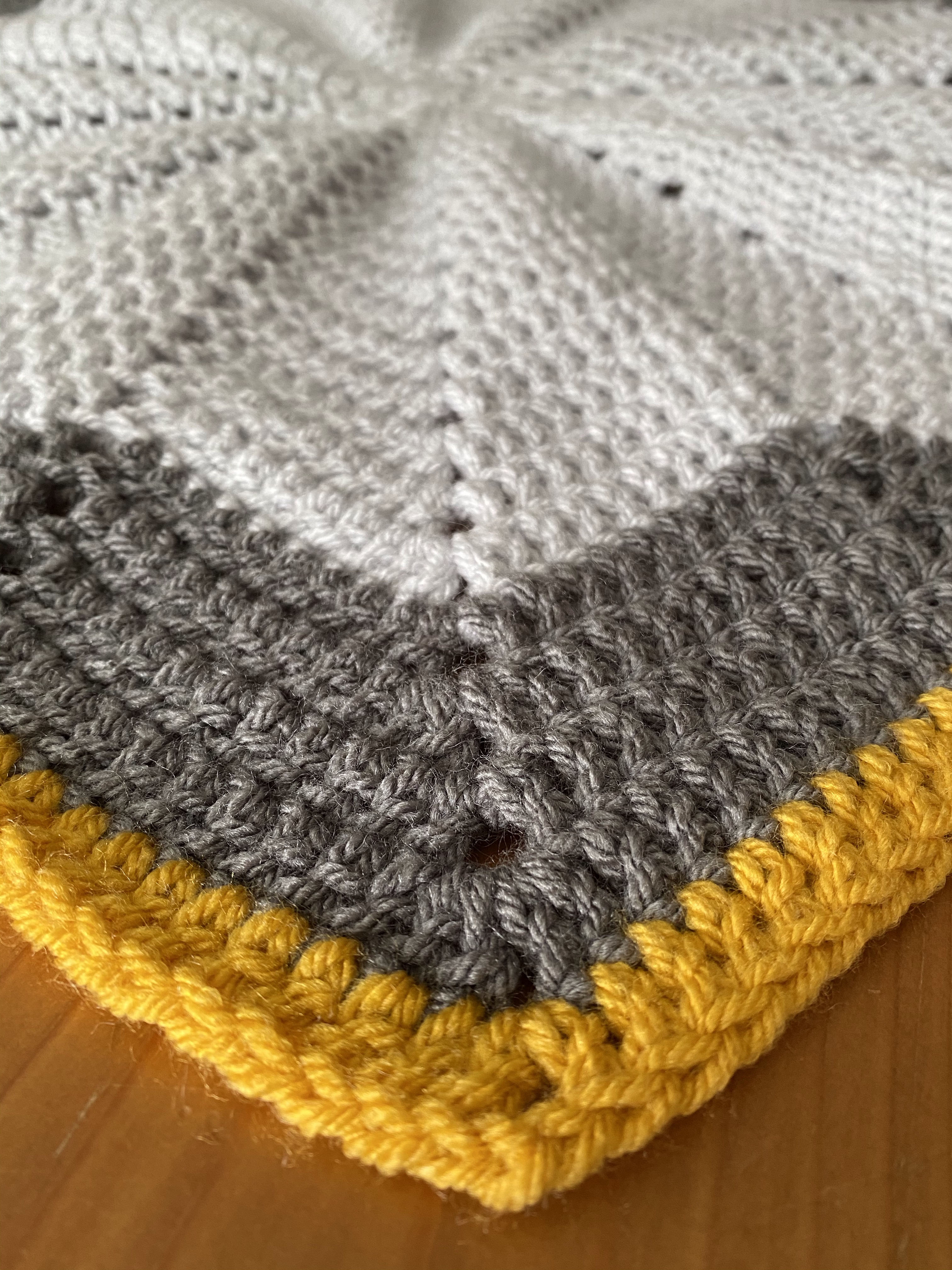 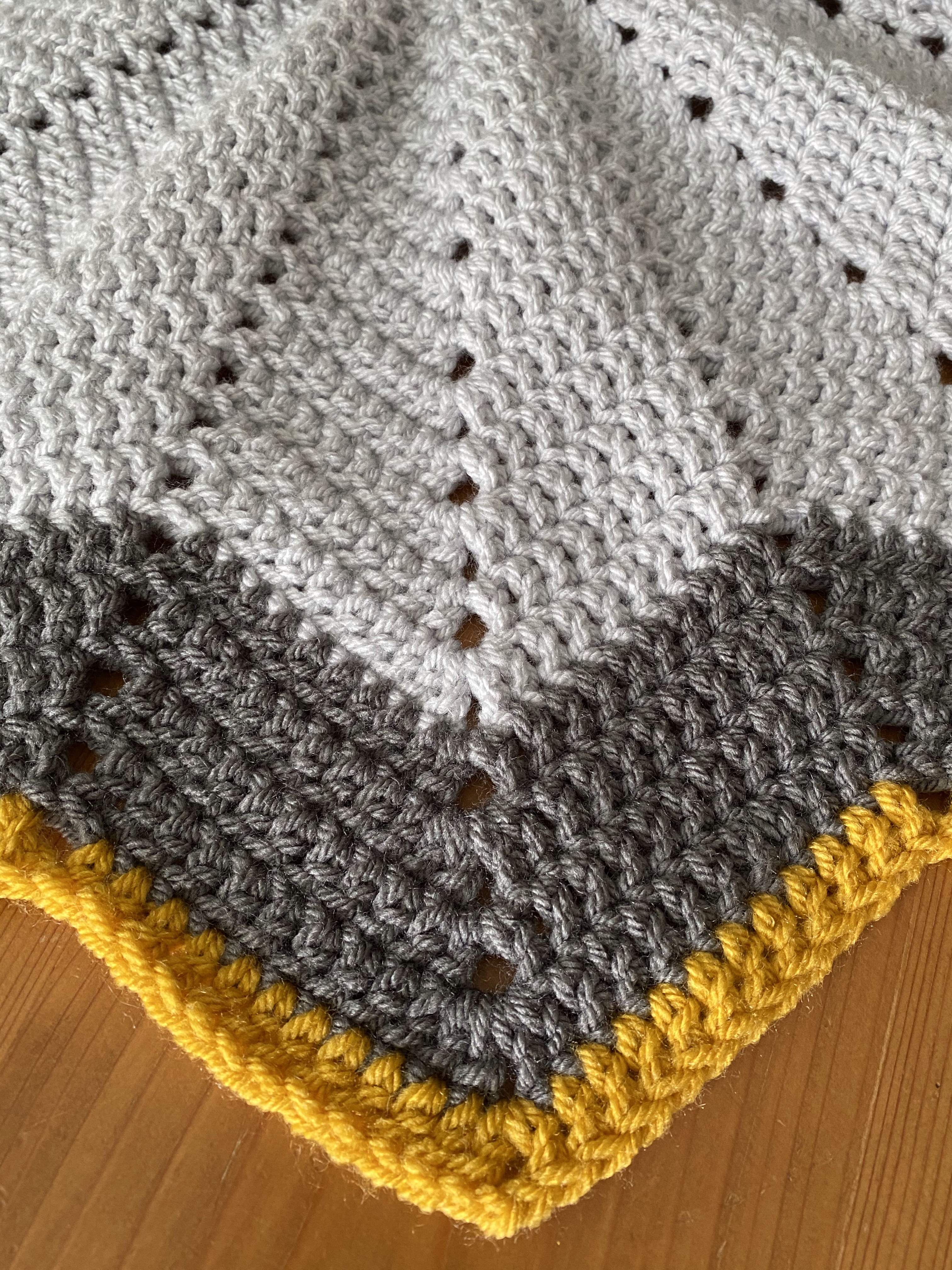 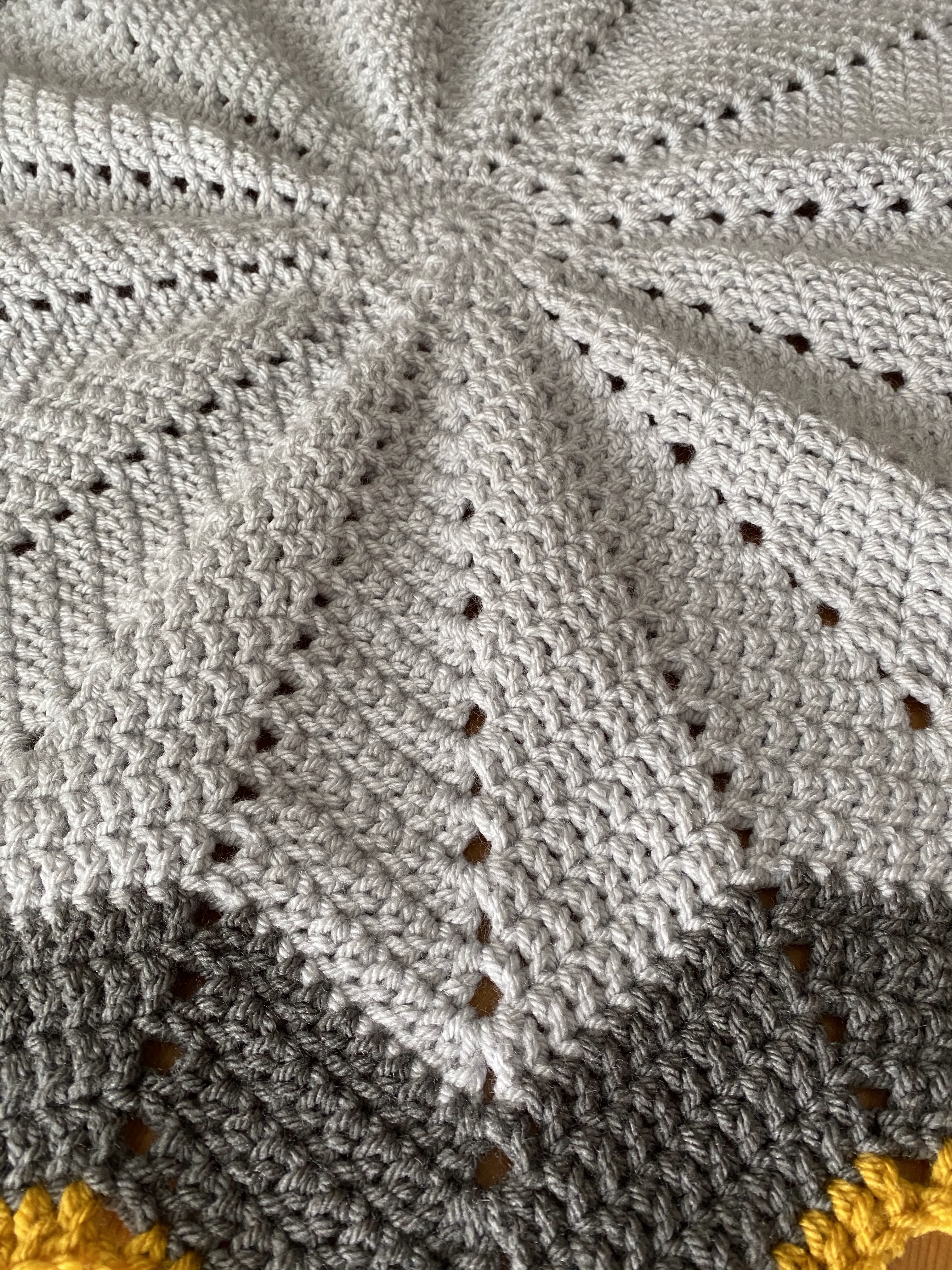 I might plunge my hand into the craft box and pull out a bag, as if from a lucky dip tub. I can’t quite remember what’s in there. 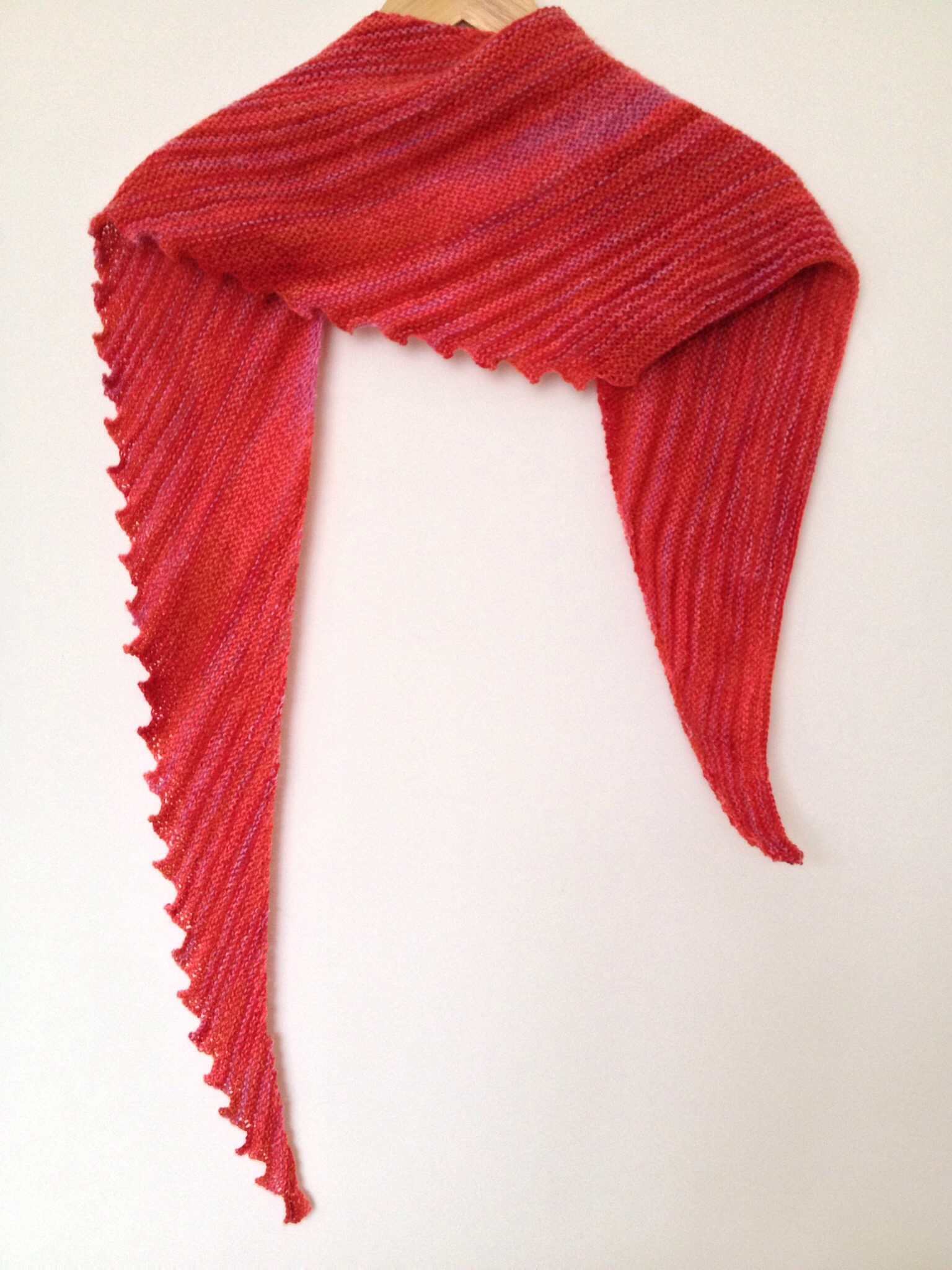 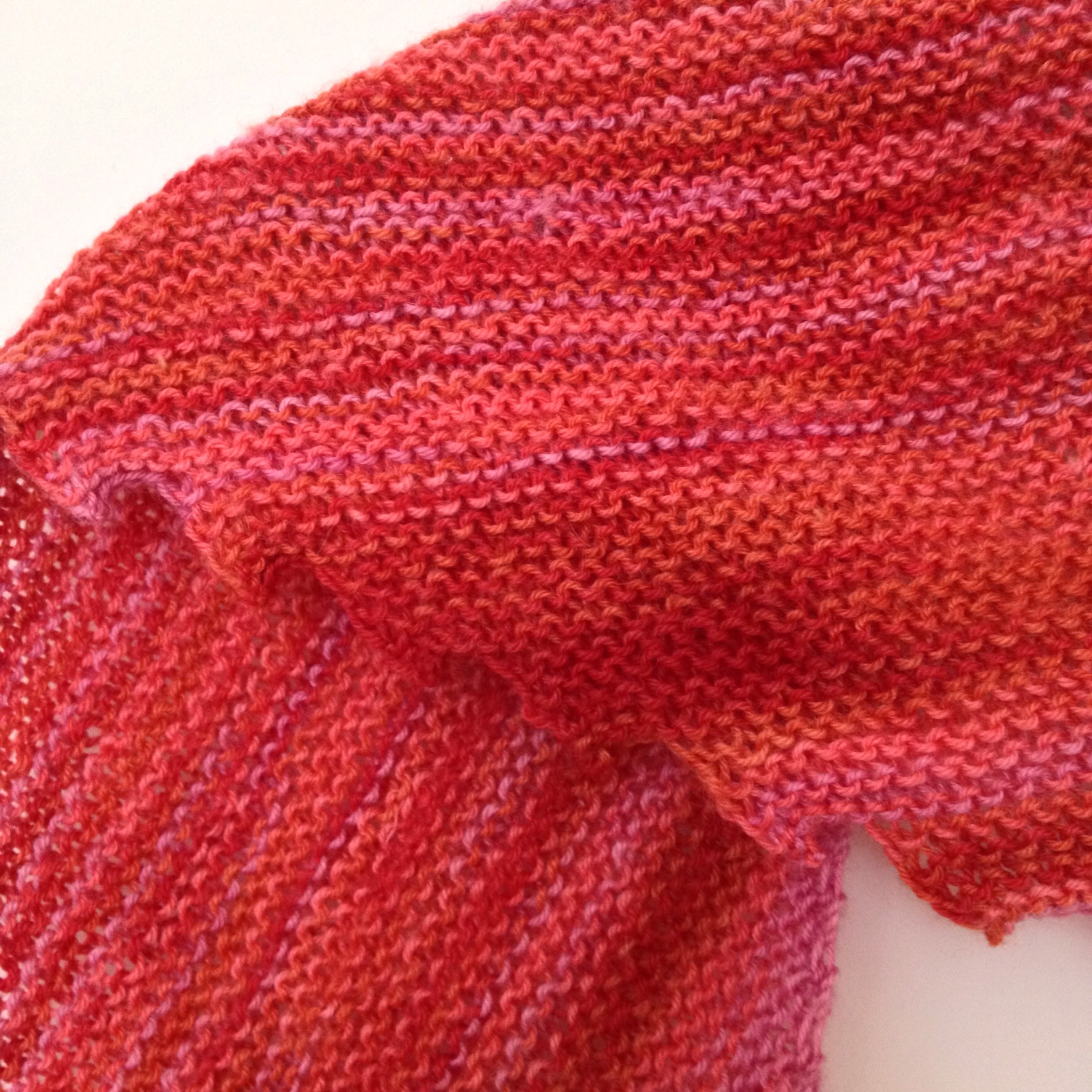 My  Hitchhiker sat in a bag for a while and when I finally got around to finishing it, the last 8 rows took no time at all. Well, apart from the row I had to knit backwards, which is my term for undoing stitches. Instead of purl 1, knit the rest I realise I’d purled all. You never realise these things until the end of the row. I blame it on David Sedaris and his turtle story, which I listened to on the BBC radio iplayer. You’ve got to blame lapses on someone haven’t you?

I don’t really know why I thought it was a good idea to use 4mm needles with sock yarn. It seemed the specified 3mm needles for 4 ply yarn, used with sock yarn and combined with my knitting tension would make a scarf (I can’t call it that name ending with ette; it makes my my mouth pucker) suitable for a dolly. This is why it’s a slightly loopy looking at the edges. Loopy is so much nicer a description than holey isn’t it?