I finished this on Saturday. I took the next two photos when it was dark so they’re not the sharpest, sorry.

Here’s the first Blooming Flower cushion I made back in the summer.

They’re really quite fast to crochet and you can use up lots of odds and ends of yarn. The pattern is one that Lucy adapted, if you fancy making one too you can find the pattern here on her Attic 24 blog. 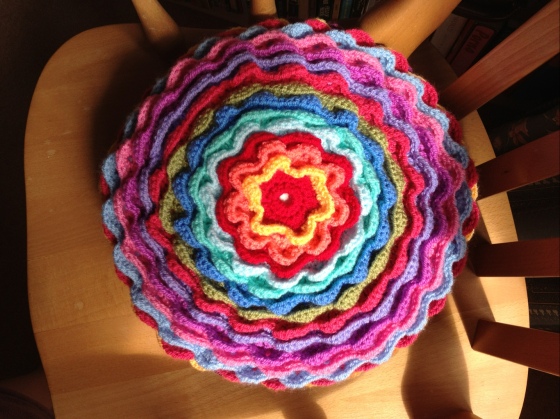 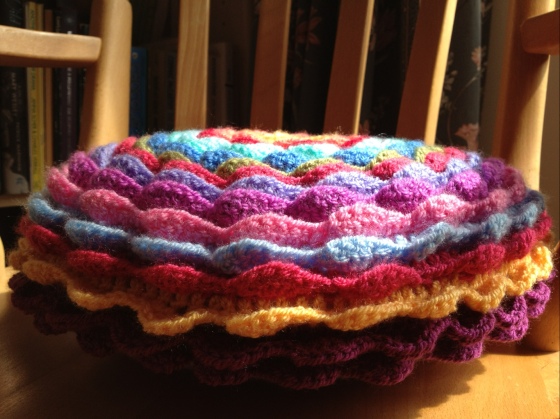 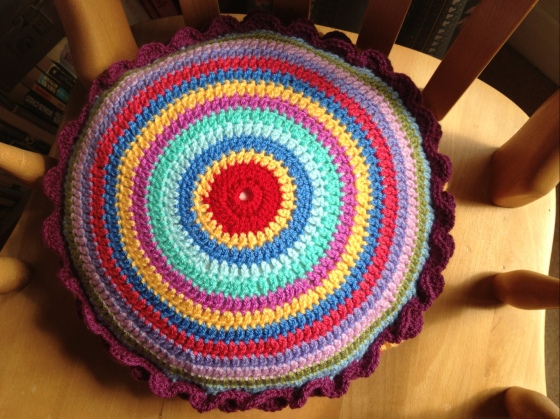 I finshed this book earlier. It’s an extremely easy read and described as a ‘cosy mystery’ in the States apparently. I’ve never sampled a knitting murder before, as gruesome as that sounds….!

Sainsbury’s, Tesco, Co-Op, Martin’s Newsagents, a little Post office/general store – no magazine joy. Superstore Sainsbury’s further afield – BINGO! I was so happy I took this photo to mark the occasion. I need to subscribe; since I really would miss making fun of some of the patterns and miss out on the good ones. I’m not about to highlight the funnier ones now. Well, apart from to ask: would you like woolly gnomes in your garden or to create woolly ice-creams? If the answer contains a yes this is definitely the buy for you this week. Grin. 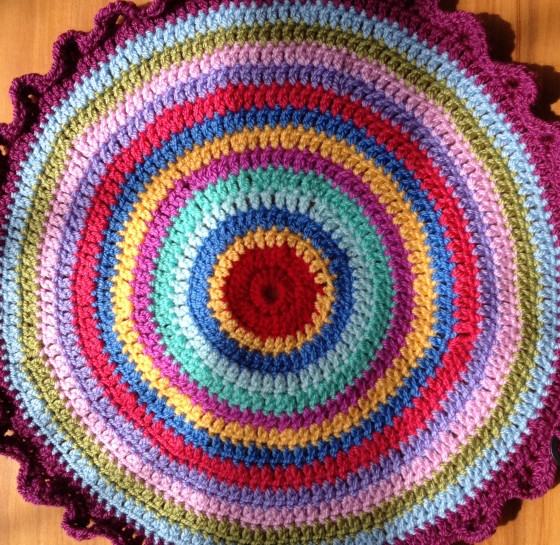 Thank you for all your lovely, lovely comments about the wonky-middled Blooming Flower cushion back. It’s not that I didn’t take any notice but I can be a bit of a perfectionist. Knowing I am capable of making something much better, and giving a wonky one as a present to a little sweetheart for her 4th birthday would have made me feel rather uncomfortable. It’s all good crochet practice too. The colours are better in my second version of the cushion back too. I just need to dc it together with the front.

For the Diamond Jubilee the Queen and Prince Philip are holding celebratory tea-parties around the country. People were invited to take part in a free lottery to attend. S’s parents were successful and have been to Henley upon Thames this afternoon to have tea ‘in the presence of the Queen.’ They were very close to both, about 4 feet away apparently at one point, and dropped in on the way home to give us two Royal Brownies (seems fitting to use capitals somehow) that my MiL sneaked out in a paper cup. So sweet!

Apparently the steam powered barge the Royals travelled upon down the Thames, during the main Jubilee celebratory weekend, was moored on the river and there were a number of other boats. It sounds like the tea was quite a spread too. Jealous! But sneezing and wheezing all over the Royals is pretty uncool I imagine.

Sorry folks, I can’t hang about. I have a ROYAL Brownie to consume. :-D

PS: I bet it’s calorie-free being Royal and everything too.

I have finished my blooming flower cushion, well thought I had anyway…
After I’d dc-ed the edges together at the beginning of the week, around the sumptuous feather cushion pad I bought from a seller on Ebay, I realised that the joins of the red rounds in the middle are quite not very good. B****r!!!!
I’m going to have re-do it I think. It’s going to be a present along with the Rainbow Granny Stripe blanket but even if it wasn’t I don’t like knowing its not very good.

I have yet another cold this year, I haven’t had so many for years. I can’t believe it. The new Let’s Get Crafting Knitting & Crochet magazine was going to help operation cheer-up Rachel this morning, but wasn’t in Sainsbury’s this morning. Boo. 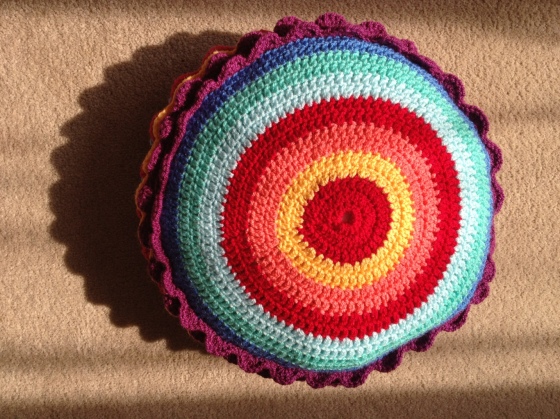 This weekend in free minutes I’ve been…

…And trying my hand at Lucy’s blooming flower cushion. It’s very fast to make in all its gaudy loveliness. I thought it could be an accompaniment to the rainbow Granny Stripe blanket when it’s given as a fourth birthday present later in the summer.

The ripple is in an Orla Kiely designed bag sold to raise funds for a children’s cancer charity. It was sold in Tesco’s a year or so ago. There is another one of her designs for sale at the moment if you have a Tesco’s nearby. They’re only £4 and really sturdy strong bags for carrying shopping, storing large crochet blankets in progress (and wool), books or whatever. I admit I bought the newest bag a few days ago. It’s lovely.

I’ve been nominated recently for various blogger awards and would like to say that I take this as a real compliment, thank you very much. :-D