I know: it’s been so long. I’ve thought about writing lots of times. I’ve been astounded at the number of people still signing up to follow an inactive blog and how many weekly views it’s continued to gather and felt a bit guilty about my continued silence. But that’s not the reason I’m here now. We have all found ourselves in an unprecedented time. All around the world we are in it together. As the situation has unfolded I’ve found myself wondering if I will wake and realise it’s all been a bad dream. I thought now might be the time to wave hello, to write to try to make sense of what’s happening (impossible) and show you some pretty colourful photos. It might help? I’ve just messaged Trish (Made by Patch) and said she needs to blog too as it’s morale boosting! I can just imagine her rolling her eyes. 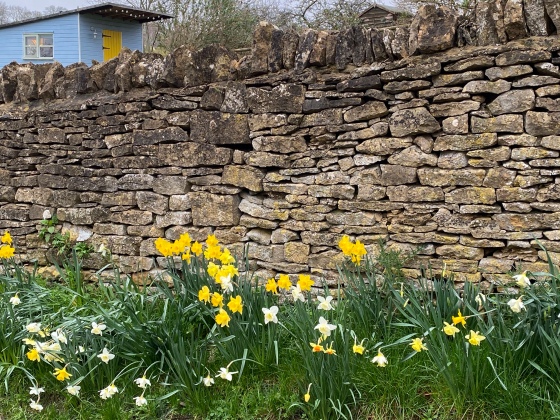 So why the sudden silence last June? I think I’d better explain as briefly as I can, but as I seem to have lost my non-waffle mode sorry, it’s probably going to be anything but.

Here goes: I didn’t want to put myself under pressure to craft and just didn’t think a craftless craft blog was particularly interesting to read, or write. (I don’t blame you if you’ve got this far and are already yawning. Go if you like. Wash your hands, then go straighten something, dance around the kitchen or polish a mirror.) It had all been a bit of an effort last summer so I paused with the intention of not trying craft again till September. I did try, but it just made my hand too sore and I realised that crochet etc shouldn’t be my priority; instead it should be aiming for pain free normal usage, not putting my hand under stress for the sake of a hobby. It was a hard decision. I’ve missed the soothing mindfulness and feeling of creating something useful for others, but have kept busy doing other things like walking (I smashed my target of walking 1000 miles, I actually walked 1,100 miles) baking sourdough bread for the Bread Monsters and reading lots of books etc etc. I withdrew from Instagram and other crafty social media too as it was just to depressing to see. When I packed up my craft kit, the other week, I realised how many half started items I have. Maybe one day they will be finished. The rehabilitation has been slow, but I can now manage lots of normal day to day stuff without much thought. After nearly 2 years, so it should be! 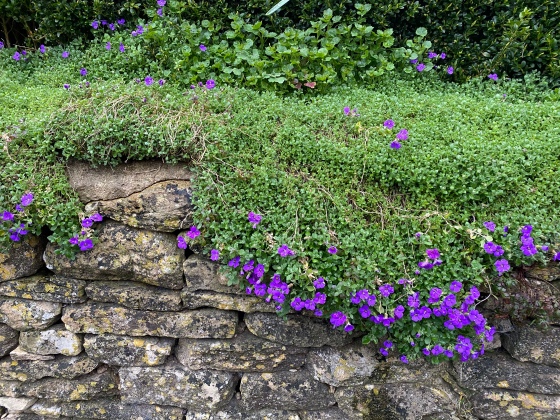 A fortnight ago yesterday we moved. It’s been a really strange time going from a street where we knew all our immediate neighbours and felt part of a very friendly community, to somewhere where I haven’t even seen any neighbours apart from two, because obviously everybody is staying close to home or working longer hours. I’ve written lists of things to do, order, items to unpack, areas of the house and garden to sort and clean, but it’s been a strange few weeks. It’s a juggle between settling into a brand-new house and area (although not a million miles away from the last) trying to think what we need before a potential lockdown, combined with worrying about family. I’m not unique in experiencing any of that, I know. We’re all in it together. 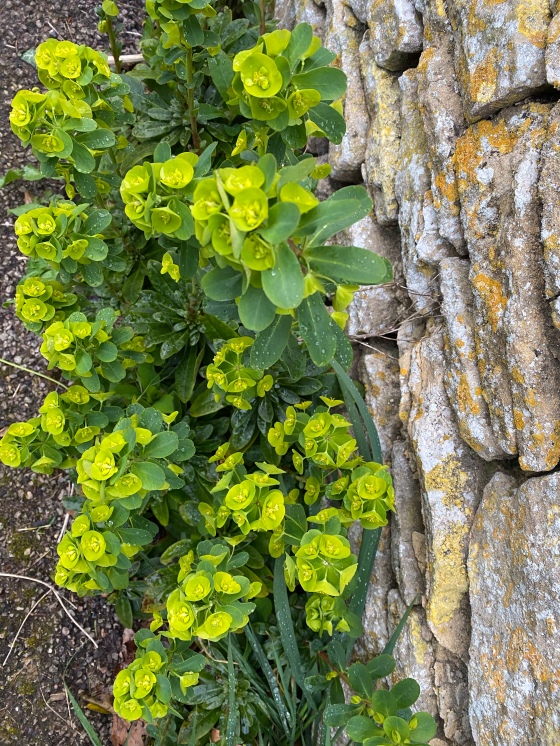 I’ve cancelled my hair appointment for Tuesday. I either have to learn to colour my own hair or embrace a streak of grey, eek! So far my car is still on to be MOTed at the garage on Monday. Luckily I just usually pop the keys through the letter box, so that should minimalise any interaction until I pick it up. I’ve ordered and received spare asthma inhalers. I checked that Mum has a grocery order coming (today actually after a week or more wait, but she’s lucky to have a slot as long as it hasn’t been cancelled this morning) and I’m crossing my fingers that she gets some of what she’s ordered. However I seem to be far more concerned than she is. She said: “Rachel to be honest I’m not really worried if they don’t bring me any pies, as long as they bring me a bottle of whisky and a gin!” I’m missing her, it seems like a long time since we’ve seen each other. Skype is awful. It’s been years since I used it and when I tested my laptop I could not see or hear my friend. On my iPhone I could not be seen and heard, but could see and hear him. I’m so used to switching on WhatsApp and selecting the call or video icons and it works. I’m not sure that a lot of the older generation are going to be savvy using Skype or want to, but I would be happy to be able to see them in person.

Panic shopping has really meant that some of the elderly and vulnerable have missed out, although I read of so many good things in communities and people looking out for each other. If you need help, please reach out to people around you, there are many genuine people and local organisations gearing up for good in this situation. In some neighbourhoods people have set up a system where if you need something, and are socially distancing yourself or self isolating, you put up a sign in your window saying HELP. Another I’ve read about is if you need help you put a red piece of paper up in the window, or something green if all is okay. A few older people that I know have had outdoor coffee mornings in front gardens this week. They’ve brought their own chair and their own mug of coffee and sat at safe distances from each other. Such a great idea! 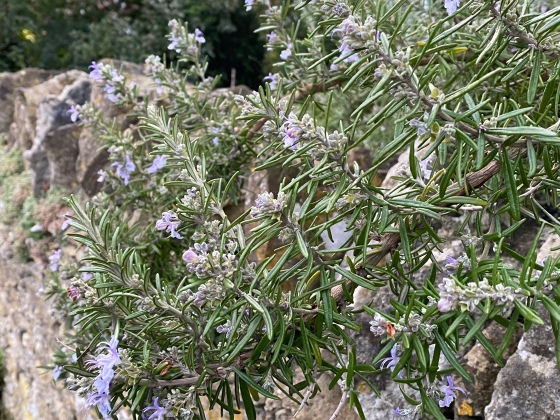 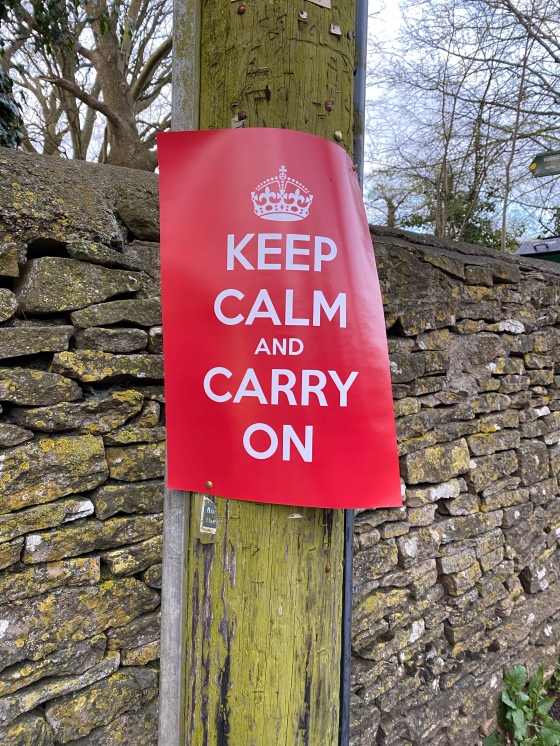 I haven’t panic shopped but I did go to the supermarket and picked up a few things for the week, on Monday, as I needed fresh fruit and veg. For that I’m really grateful since it was pretty quiet generally, although it was slightly busier than it would normally have been. My brother said he was not panic buying either, but was getting a few things every day. He had bread flour, chorizo and Parmesan in his rucksack. I found myself panicking about odd things like being out of cumin seeds. I think it’s just how anxiety can manifest at the beginning of something unsettling. Or, it’s just me being plain weird. Later that afternoon Someone left a note on the fridge with a full inventory of the alcohol in the house. #Priorities ?!

On Tuesday I made the decision to socially distance myself, so I have stayed away from people and only left the house a couple of times to walk. I’m on the vulnerable list healthwise and so I am trying to be sensible. I’ve heard that it’s not a case of living so you don’t catch the virus; you assume that you’ve got it and try your best not to give it to other people. The thought that it might be for 12 weeks, as was reported in the media at the beginning of the week, was extremely daunting, And now it seems things might be a whole lot worse. A few friends have a strong feeling, this morning, that we are about to be informed that we must lock down neighbourhoods, only travelling to collect food, work or for medical reasons. I hope they’re wrong, but it’s probably what’s needed.

I’ve been using the following advice this week:

By Wednesday, hearing that my evening class and other appointments had been cancelled for the forseeable future, it was starting to feel very real. Our holiday was cancelled and so we’ve had to claim refunds or credits. I was unpacking a box of summer clothes and my phone was pinging every five minutes with emails from companies and organisations. The creative alternatives springing up online have been brilliant; I have joined a virtual choir group to replace my singing class and I’m sure there are lots of x-alongs going on on Instagram. I completely failed with the first virtual choir rehearsal. I was cooking dinner and my alarm suddenly went off at 7:15pm scaring the Bejesus out of me. I couldn’t work out what it was for and wondered if it might be a mistakenly snoozed alarm, so carried on cooking. I didn’t realise it was my own 15 minute warning, so that I would get a glass of water, go to the loo and log in to sing, until the next morning. D’oh!

On Thursday I went for my first walk distancing myself from others which wasn’t difficult as it was raining. I took photos to share with friends from my walk on Thursday and on Friday, those are the pictures you’re seeing.

Friday’s task was to unpack another box (ornaments) and keep myself out of the way of the plumber. I really regret sending my 1,000 Movies Before You Die (soz, unfortunate title) to the charity shop. What a time to get rid of it. I offered to chat to anyone on the ‘phone who need it, but it’s early days so I think people are okay. However I’ve never had so many messages and emails from many friends and family as I did last week. Constant streams of WhatsApp messages, Facebook messages, messenger chats and emails. This morning I woke to so many notifications. People are really striving to keep connected and keep up with each other. It’s really warming and reassuring. I think my generation are going to have to be careful that we don’t just do everything in type, someone on the radio this morning was recommending that everyone try to make three phone calls a day; so that we stay connected by more than font. 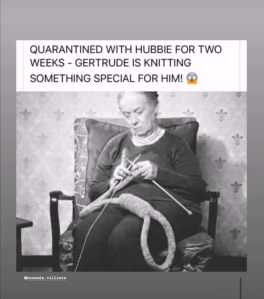 As I sat dictating this post my ‘phone pinged with this, he’s an idiot. I can’t really knit still anyway. Or…can I?!?!

There was a knock at the door yesterday and a case of wine from The Wine Society and two bottles of whisky were delivered. The inventory had obviously highlighted a lack… ha! I was endeavouring to continue Dry Lent, but accepted it’s not the ideal time this year so had a G&T and a glass of red last night. I’m going back to abstinence until next Friday if I can.

Keep cosy and appreciate those woolies. You’ll be so grateful for all the times when you were churning out blankets and scarfs and hats and hot water bottle covers. I have been! This was taken last Saturday morning, when I was reading in bed. I’ve never been so grateful for bright colourful stripes, there is something so reassuring about them.

So lovelies: we sit tight, listen to what is best for us to do from those who know,
take care of ourselves, and people around us; if we can do so safely. Don’t be afraid to ask for help and to say when you need to talk to someone.

I’ve had some comments on here already and I’m sooo pleased. I do love to hear from others. When trawling through blogs I comment on everything that impresses me, makes me think or when I want to ask a question (I’m full of questions most of the time) and hope you will comment here too…

Next time I’ll show you my crocheted jar cover. I spent last night, Friday evening, making it. How cool am I?!