Yesterday a friend and I went to the latest exhibition at the London Fashion and Textile museum in Bermondsey. I’ve visited a few exhibitions there before (Kaffe Fassett and Bellville Sassoon.) It really is a gem of a place. Originally founded by Zandra Rhodes in 2003, it’s now operated by Newham college. 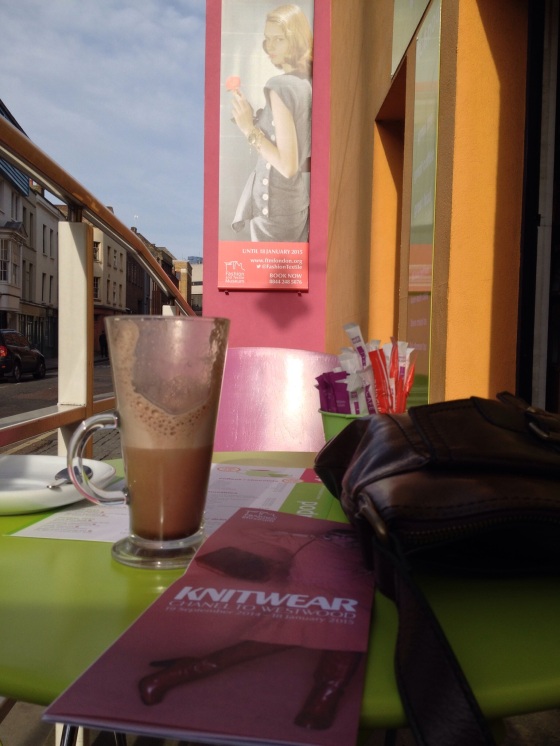 Before buying our tickets a few weeks ago I’d Googled to see if there were any discounts. It’s so worth doing this before buying anything online. The results showed an Amazon Local deal several pounds cheaper, with vouchers for two hot drinks at the cafe. While I waited for my friend I used mine, I’m not sure why I chose hot chocolate as it was 21 degrees by mid morning! This is very strange weather for October – though beautiful.

The exhibition brochure begins: ‘Knitting is one of the most fundamental textile techniques, produced from a continuous yarn and simple needles, yet its origins are shrouded in the mists of time. Early examples of knitting dating from Coptic and Egyptian cultures still exist, along with hats, stockings and knitted undergarments from the sixteenth century…”

Most of the examples of knitted and crocheted garments are from a private collection and the exhibition ‘reflects the emotions we invest in objects.’

I took this with the wacky and wonderful Jill in mind. At the moment she’s busy crocheting rhino horns for beanies. That seems to be one of her typical working days.

This is an Edwardian wool petticoat from 1907. Can you imagine wearing it under layers of clothing?

To read some blogs there are current designers and makers who write as if they invented ripple and chevron patterns, but in 1907 (and probably long, long before) women were choosing red and black wool and rippling away. It’s quite humbling isn’t it? Nice too, to think we’re just many in a long history of the craft. 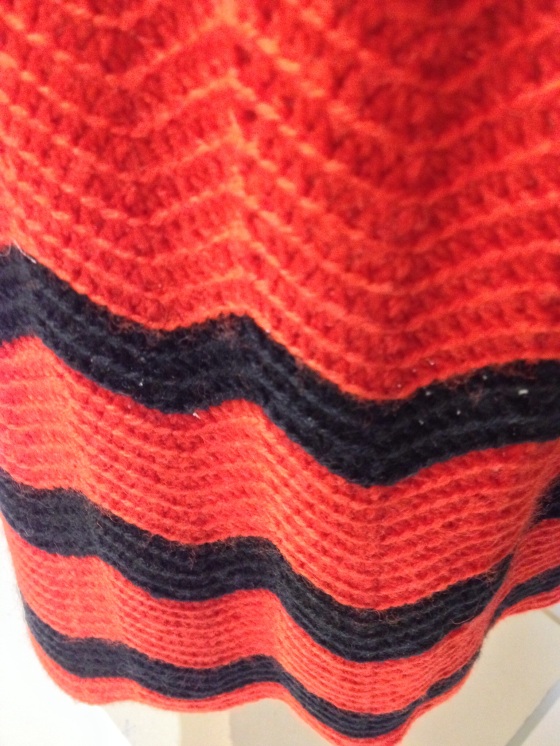 How old is this crochet dress? When would you date it? 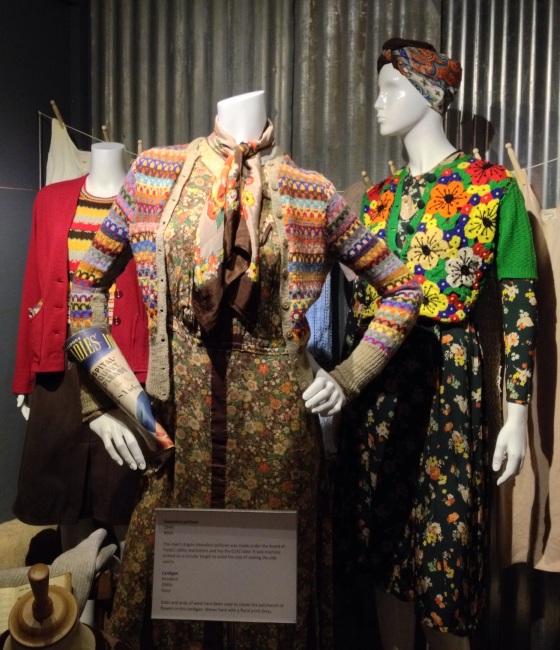 Items from the 1940s Make Do and Mend era during The Second World War. There are examples of old dresses reworked into new skirts and garments knitted or crochet from many oddments of wool.

The exhibition is not without faults I’m sorry to say. Some other women we chatted to felt that there was not enough information about how items were made and they regretted not being able to see garments from all angles. Curiously the displays were standing in what looked like giant packing crates. Signage is rather unclear so it takes some time to work out which garment information refers to. I found displays on top of crates really frustrating. They were at least 7′ up in the air and you couldn’t see them clearly. Why?!

Wonderful fair isle tank tops. As we read the info the four of us all chorused – before we came to it – “And the Prince of Wales was sent one and wore it to see the GOLF and that’s how fair isle became famous.” It’s obviously one of those tidbits that everyone remembers.

There was much more to see and this is just a taster. The exhibition is there until January 18th. Although we experienced some irritations with the display I would still recommend visiting if you can, as the sheer range of items is interesting. I heard many cameras clicking and comments as people recollected similar clothing they, or their Grannies, used to wear!

Afterwards we walked towards the river. Look at all those t-shirt wearing people. In October! In London! ENGLAND! I was one of them, because thank goodness I checked my weather app before I left home.

Looking across the river we could see that the area around the Tower of London was busy, but it wasn’t until today that I heard of the surge of people who took advantage of half term’s sunny weather to go and see the poppy installation, a memorial for the British and Colonial soldiers who died in the First World War. Apparently Tower Bridge tube station had to close several times during the day. And now visitors are asked to delay going until next week because of the crowds. 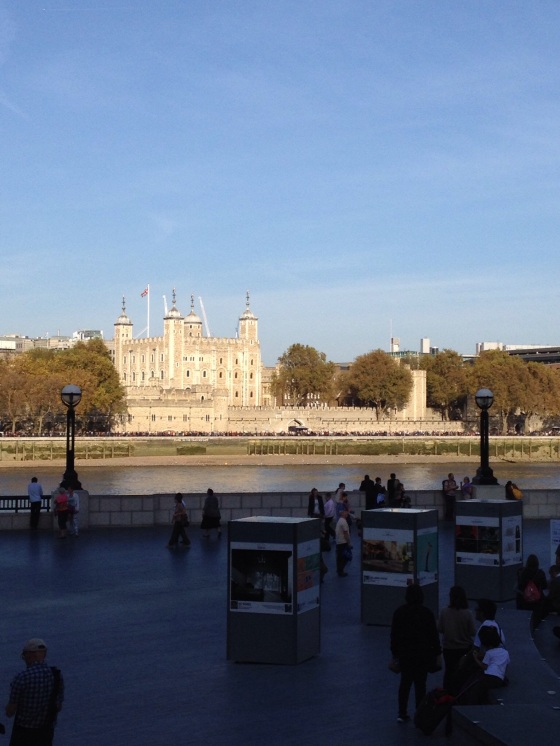 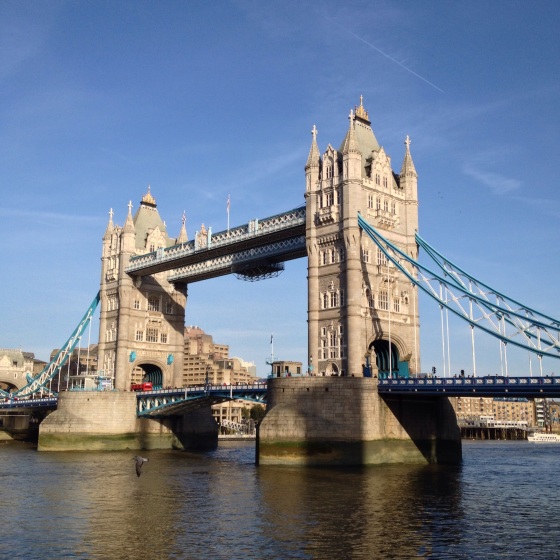 Next we aimed to walk to Greenwich, along the Thames path as far as we could go, as we had tickets to visit somewhere really cool (not at all) but paused at The Angel, Rotherhithe for some of Samuel Smith’s Yorkshire finest. Sitting on the outside balcony watching the river craft passing, hearing the water lapping below while soaking up the sun turned out to be a very good thing too. When the sun shines like that you make the most of it. And the other thing will have to wait until the end of the month.

Happy November to you.

Natasja of crochetime and I met yesterday at The Fashion and Textile Museum in South London to ogle Kaffe’s designs and use of colour. I used to be a huge fan of his tapestry (aka needlepoint) and have owned a copy of Glorious Needlepoint for a long time. Mum reminded me, over Sunday lunch, that she has several of Kaffe’s knitting books and heard him talk in the early 1990s.

It was great to see my favourite tapestry designs in 3D, especially the vegetable cushions. Radish anyone? Or perhaps you’d prefer a beetroot?

I know that many of you are not near London, or even in the UK (if you are then the exhibition is on till 29th June) and so here is a good selection of what I loved. If you like tapestry you’ll probably be swooning along with me.

Click on any image to view a larger version. 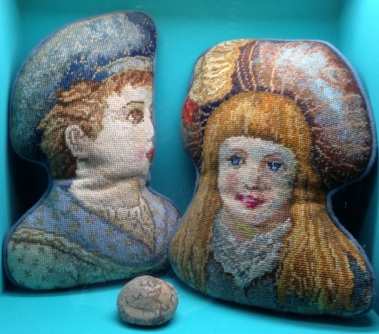 Do you recognise this pair?

You could giver Kaffe anything and he could turn it into a texture, just name the medium

If only I could draw & paint 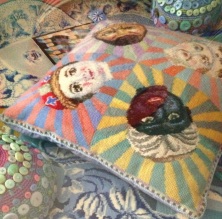 The colours complement each other perfectly

Cushions in rings going high up the exhibition space walls

Such potential to be tangled in balls of colour!

I really wanted to the back as well as the front! (it was part of a texture wall we were encouraged to touch)

The one section of crochet we saw…some caps

A close up of the chair 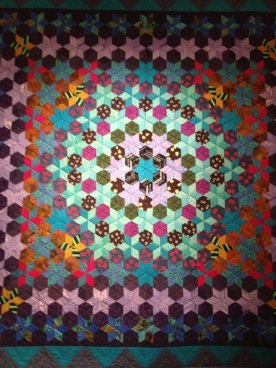 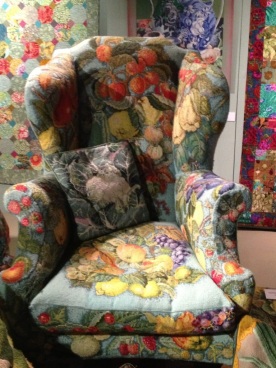 A fruity chair with a veggie cushion? Yes please! 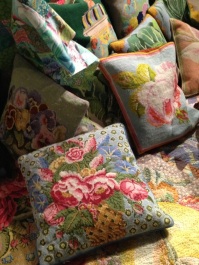 “Colour themes that run throughout his textile work include the historical hues from early-medieval and Renaissance decorative arts, traditional pairings of blue and white, and the rich inspiration of China, India and international travel. In 1992 Fassett visited India as part of a charity delegation to explore what handicraft might be produced there to sell in Britain to raise money. The experience was profound and sparked a shift in his use of colour.

‘India proved to me that colour is a vital ingredient in life.'”