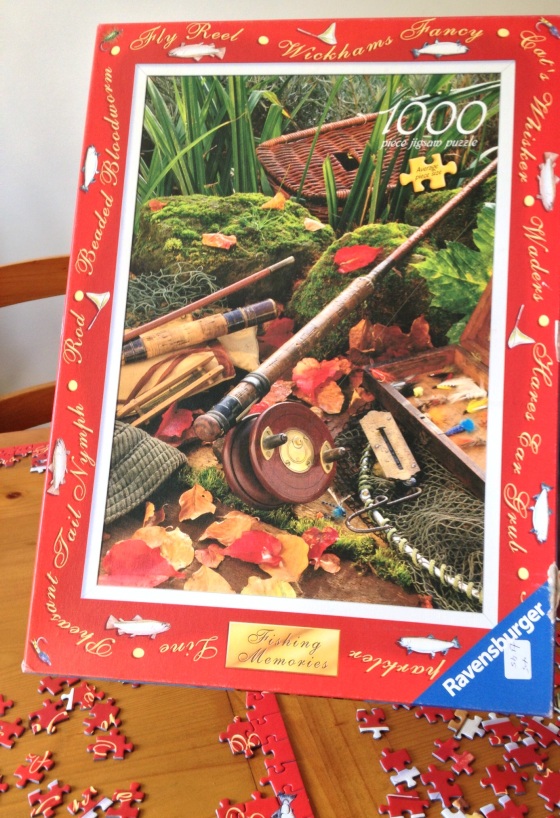 This is my bargain of last week, a 1,000 piece jigsaw from my favourite charity shop for £1.95. I have to admit that I would never have mentioned it here, but when I sent a ‘look at my bargain!’ message to a few friends and family I realised from their replies that puzzles are people’s guilty pleasure. Or maybe we are just a really uncool lot! Actually today I saw that Hobbycraft sell them, so maybe they’re popular again?

I’ve harped on about wanting to do a jigsaw after reading a Christmas novel, which I bought from a charity shop sale shelf for 25p last January. My friend got me onto Christmas fiction and so I keep my eyes open for a few books for December every year. Anyway, the main character in Twelve days of Christmas by Trisha Ashley cooks for house parties in the summer and house sits for a rest in the winter. This year things turn out rather differently and she ends up with a houseful of the client’s family. While stocking up with food and presents she sees the village shop has a jigsaw, which she leaves on a table in the dining room for everyone to do gradually as they pass by. It just caught my imagination for some reason. Suddenly I really wanted to do my first jigsaw since childhood. It’s a joke really as I found the outside so hard to do, the red background and yellow script are REALLY hard, and I lost my mojo. However it turns out I live with a puzzle genius who has now completed nine tenths of it. I deliberately chose one with a fly fishing theme, as I thought it might interest him into helping me. It worked, with bells on. I don’t give up on them all though – I await a delivery of some of my friend’s jigsaws (“Not hard ones please!”) 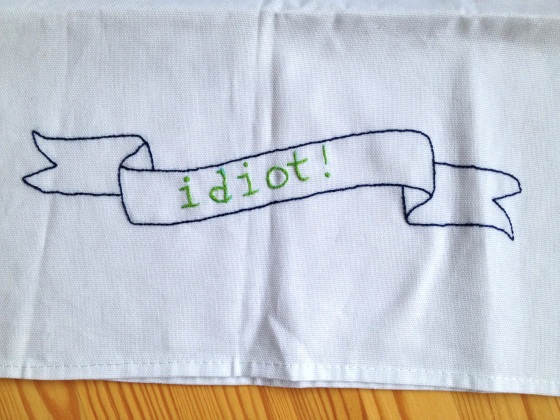 I found this personalised tea towel the other day. I’d forgotten I embroidered this, I was asked to add a trout but that wasn’t the original plan so I’m not. It’s going into service. I might do a ‘moron’ one to complete a set….! It’s a family joke.

I’m baby hexieing still, mostly just doing a group of seven at the weekend, so am sticking to the original one-a-day plan now, though might have a splurge and make lots more at points during the year. It depends how I feel. The thing is that the material doesn’t have a lot of drape because the hexagons are so small.
This is the boring part of the process…. 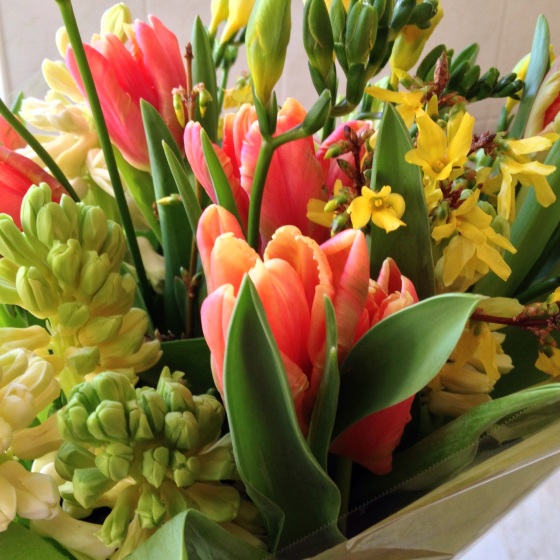 Yesterday there was a knock at the door with what I guess is the signature flourish of a local florist’s delivery driver. Isn’t this a beautiful bunch of flowers? Forsythia, tulips, freesia and something which look like hyacinths. The card says they are to brighten these drab February days. They certainly do and smell delightful too. Lucky me.

I did an incredibly nerdy thing the other day – I made an inventory of my Clover Amour hooks, just so I know what I’ve got. My new 5.5 mm and other (I can’t remember!) sized one arrived in the post and I thought it seemed a good idea at the time. This is more embarrassing than the jigsaw puzzle probably. I hang my head in nerdiness.

What’s happening with you? Do you want to write a Five Things post and put the link below?