I’ve seen this recipe on Pinterest numerous times but find that I tend to pin away without actually going back to browse my recipes or patterns enough. A very good prompt, to actually make whatever it is, is when you see someone else has successfully had a go. I bet £1,000 that there’s no one reading this (apart from perhaps five people?) who haven’t seen Lucy’s Attic 24 post on this recipe this week.

I won’t rehash the recipe since it’s all there, plus the blog post on Simply So Good who seems to originally have brought the recipe (from a US newspaper article I think) to the blogosphere.

Here’s my loaf, baked today, straight out of the oven. You can almost smell the aroma can’t you? 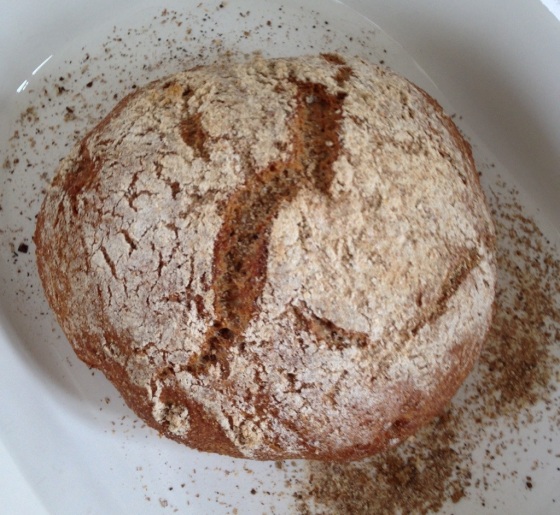 Although online notes about the recipe caution against using wholemeal flour, because the bread can be rather heavy, I didn’t know this last night. Since I had a half used bag of strong wholemeal bread flour in the pantry anyway I grabbed it, before quickly mixing the dough in my Kenwood and heading off to bed.

It’s not the lightest bread in the world, but it’s fine – much lighter than rye or pumpernickel. You can see the air holes in the loaf. It gives a nice hollow sound when you tap it on the bottom (which you do to check it’s done near the end of the cooking process.) I cooked it in one of those white ceramic pyrex dishes with a glass lid. In my fierce oven 30 minutes was enough to bake the loaf and give a nice crust, without it needing an additional 15 minutes uncovered.

We’re really looking forward to toasting some for breakfast and eating with blackcurrant preserve in the morning. I’m going to try making some more using strong plain bread flour soon, and will probably experiment with seeds, nuts or fruits in subsequent loaves.
This recipe (if you needed any more encouragement to try) is really great. I have made bread before but it’s so time consuming and this is a really good way to short-cut the process. Try a wholemeal version, or add some wholemeal flour to white to make a mixture and let me know what you think.

As the oven was on, and I’ve already lost the extra Christmas poundage this week, I decided 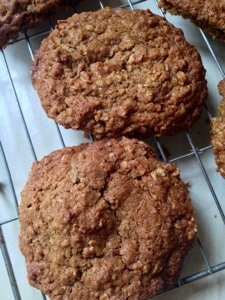 to make some of our favourite oat and raisin cookies. Actually they’re oat and sultana this time as it’s what we had. It’ll be salad for dinner!!!

11/01/14 the bread has been pronounced a big success, especially when it’s toasted as it has a lovely crunchy crust that apparently rivals the local bakery’s sourdough. High praise!