It’s been the first Saturday in weeks and weeks that we haven’t had anything planned. We both got mundane jobs – house cleaning, haircut, butchers, market for veg for family lunch tomorrow (the butchers, the bakers, the candlestick makers……!) Sainsbury’s for other things – done first thing and have basically lazed out this afternoon. Bliss! 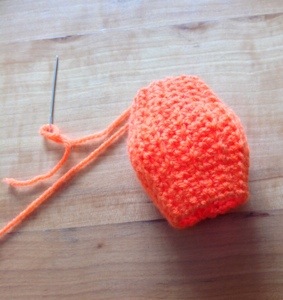 Gah!!! As Bridget would say – I got to the end of the crochet on version two and realised again that I’d forgotten to crochet into the back loops. It would really add some texture. Again I was listening to Bridget. Oh well, I was just trying to be seasonal.

After a comment about having invented a raspberry yesterday I thought I’d get a better colour than the Stylecraft shrimp shade of DK which obviously wasn’t cutting it. I popped to one of my favourite local yarn shops and bought some proper Halloween orange (cheapo Hayfield Bonus DK, bit squeaky but fine.) Afterwards I tested the colour against real pumpkins and plastic items in Waitrose, just to make sure it was bright enough, this attracted some looks which I ignored.

It’s cute though I have to admit. I might try making version III sometime with added texture, probably not while listening to an audio book!

If you want to have a go at crocheting a pumpkin you can find the pattern here on the Planet June craft blog.

Count how many different shades it looks with the shifting autumn light levels….! 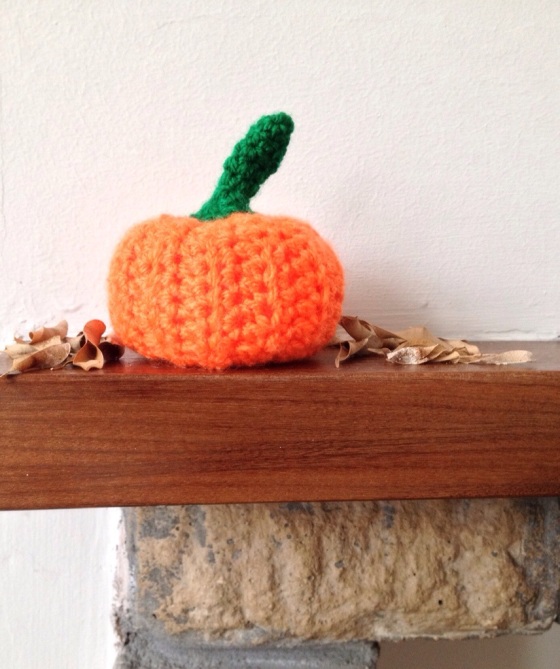