My current read is an audio book. I’ve stopped reading printed books so much in the last week or two. Hopefully buying a new bedside lamp will change this; I’ve broken so many of those glass Ikea lamps that this time we’ve gone for a metal type from elsewhere. Fingers crossed! (No, I’m not hurling them across the room, the leads just get tangled and a yank on the hair drier results in smashing glass. This still happened even when I changed things around. But if it’s breakable I’ll get it! Oops.)

It’s not quite the crime fiction, set in London, that I was expecting. In fact I gasped when the first unexpected thing first occurred. I’m enjoying the book, but during some chapters the reader swallows and licks his lips really loudly! Either other audiobooks edit this out, the recording technology is better, or they are more experienced readers but it’s really distracting and very irritating! Fortunately it doesn’t happen too often; it’s just when the character is being thoughtful and reflective so the pace of the narration is slower.

I’ve started using my new gift card yarn. This Sirdar Escape chunky wool blend is really nice to use, pretty too. I’m not too convinced about the Bergere de France poncho pattern right now, it might end up being undone and used for chunky ribbed hats and scarves, or whatever. 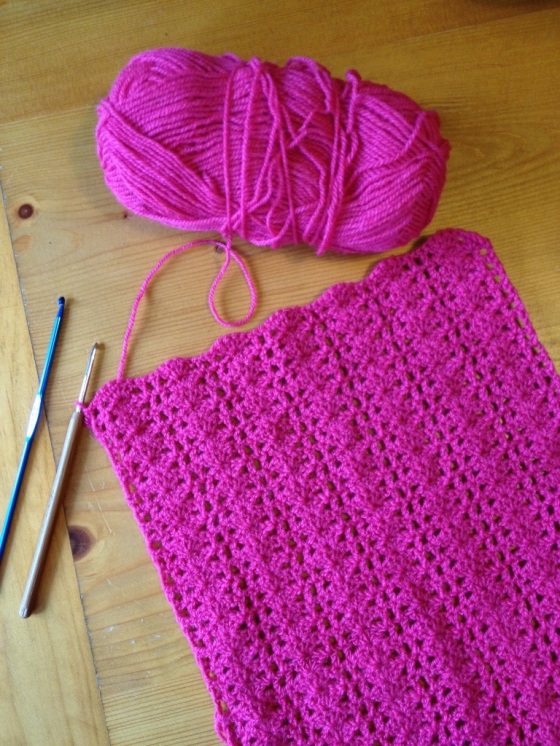 It’s one extreme to another with hook and needle sizes this week. I go from 6 mm needles to a 3 mm hook. I changed over to the Simply Crochet hook just because it’s a better grip than the thin metal one. I’m expecting this scarf to be a long term project because it’s not a whip-it-up-in-a-week-crochet-project. 4 ply and a smaller hook slows you down. That’s ok, there’s no race to win.

The changing light levels now autumn has arrived is affecting the colours in photos so much. Can you see the difference between the not-so hot pinkiness of the colour of the yarn today, and the photo I took when it arrived at the weekend?

I loved the high temps so much that the sudden onslaught of cooler weather, when I was expecting a bit of an Indian summer, has really taken me unawares. I’m amazed at how drastically I want to eat much more and just feel generally a bit fed up. I’ve banned myself from buying cheering up marshmallows because last winter they and hot chocolate were my absolute downfall. I was trying to see how many I could cram into my pint mug of hot chocolate, and it wasn’t far off a large packet – with a few extra to eat while I was making it of course.

What’s the weather doing where you are? Are you craving certain foods or drinks too?

I’m joining in again with Ginny. What are you crocheting / knitting and reading at the moment?

8 thoughts on “Yarn Along”