For ages now I’ve wanted to learn the join-as-you-go technique to see how effective it is, and if it can decrease the potential number of ends which will no doubt end up poking out of the back of my blankets in the future.

I used this tutorial. It surprised me that it took several tries to get it right. There are reasons for this:

2. I had to reverse it in my mind as I’m a leftie so had to imagine everything the other way around. I’m used to this but reason #1 influenced the process I admit.

3. I finally realised that my joins were messy V shapes rather than neat single lines because I was going into the chain space (I did 3 tr, 2 ch, 3tr for corners and 1ch in between the tr clusters) from underneath rather down through the top. It’s a tad awkward to do but results in a neat join.

4. Also I was trying to watch a vintage episode of Open All Hours.

It’s a good thing this, I shall practice with all my brightly hued scraps of Stylecraft SDK.

On Saturday you remember, while I was writing the week’s CAL post, my new crochet magazine arrived? I’ve taken advantage of a subscriber offer and ordered the three copies for £5. I missed issue 1 so have issues 2-4 coming.

As you see there’s a fair range of items to make, articles and general crafty crochet chit chat also oodles of inspiration. It’s great to have a purely crochet magazine from the publishers of Mollie Makes. I adore MM but don’t usually make anything, especially as crochet is thin on the ground. I love it for giving general inspiration and for the crafty events listings.

I like the crochet items for the kitchen, particularly the candy colours. The patterns would be suitable for newbies who’ve mastered basic stitches and would be a good way to practice skills.

The notebook pages are interesting. I’ve asked my sis in law to look out for the Ikea metalwork range, isn’t it pretty?

I’ve included this page in case you fancy taking advantage of the subscriber offer too (especially US readers.)

There’s a spread of instructions for beginners. I didn’t think the bamboo hook and white yarn showed up very clearly and the instructions maybe don’t read as plainly as I would have needed. But I need a beginner crocheter to respond and say how they actually found these instructions to be fair.

Oh this is pretty and reminded me of a similar flower garland I made last Spring. 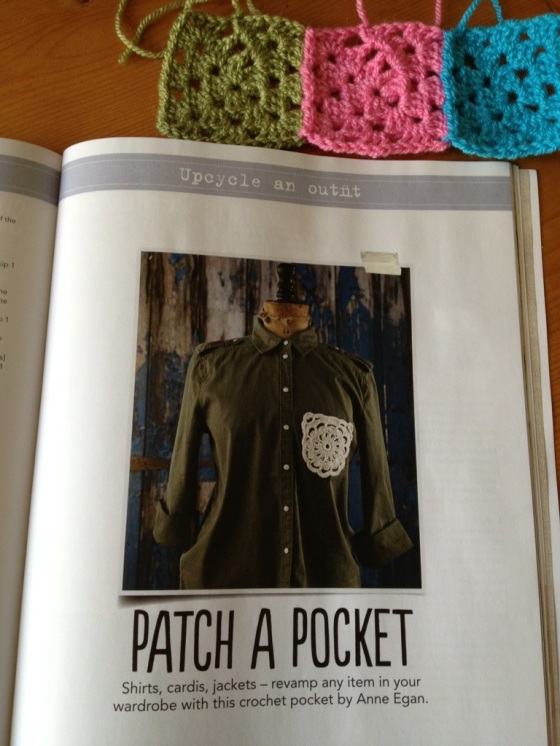 Natasja just used this idea! It looks better on her top than in the magazine, but I’m biased as I really like her blog. 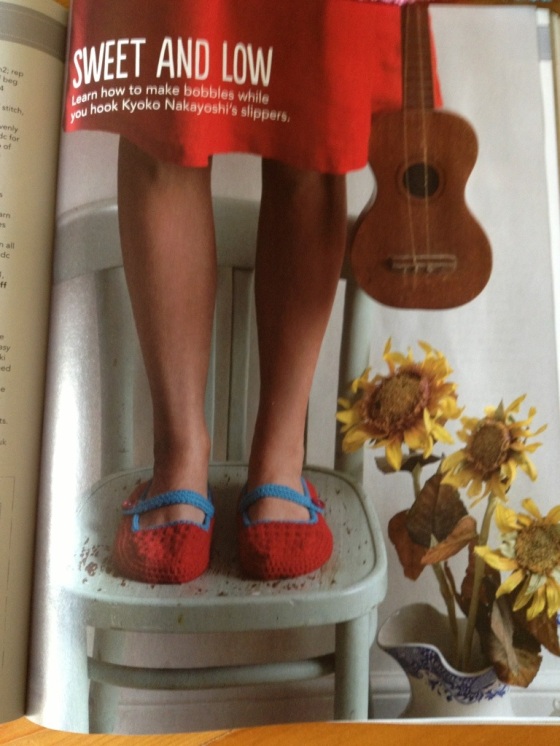 When I said I might crochet these bobble slippers (bobbles!!!!) S’s eye-brows went up two inches. Ha! Definitely got to make them now the gauntlet has been thrown down.

I’d recommend this magazine, it kept me silent for over an hour on Saturday which as S said is total value for money when the rugby’s on. ;-)