I haven’t knit anything since the purple and green scarves I made last winter, but I’ve had such an urge to pick up the knitting sticks that I’ve started a little project. 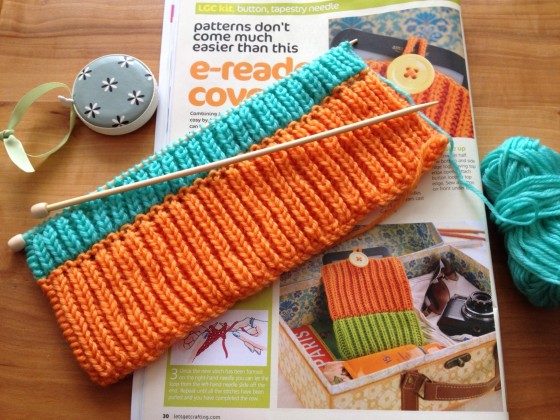 The pattern is in issue 41 of Let’s Get Crafting magazine. It looks like a simple rib but it’s a bit more interesting to knit than that; it’s fisherman’s rib and you go into the space below the stitch for the knit part of the rib. It’s a knit one below (k1b) stitch and makes a very ‘springy’ fabric.

I don’t actually own an ereader, I’m an old fashioned paper and ink sort of girl. I’ll have to offer the finished item to someone who does.

I prefer the green in the magazine but I used it all on the summer flower garland, so I’ve used the other green in the pack. Not so nice but the Stylecraft DK I have isn’t as thick, even though both are technically DK.

I have to admit that this superb little fruity item might have inspired my urge to knit. Have a look if you haven’t ever seen Meredith’s One Sheepish Girl blog.

9 thoughts on “An urge to knit”