My hook is still moss stitching away, gradually adding more sections to the third strip of my blanket. I’m not sure about you, but I finding I seem to be inadvertently taking part in a slow crafting movement. This may, or may not exist, but it’s definitely a thing in my house. I honestly goggle at all the ‘It’s finished!’ posts on Instagram some days. I wonder if they’re not telling us that it’s just been a case of darning a few ends, or sewing up a seam, on a pile of long ago started makes? Whatever. I do not feel any compunction at all to compete, but I do enjoy looking at all the makes.

The strip’s a bit further on now, as you’ll see at the end, but I like this photo showing my snuggly Tilted Squares Blanket in use.

On Friday afternoon I went to the Members’ Preview Day of the V&A’s new exhibition Ocean Liners: Speed and Style. The picture above shows part of one of the rooms where you’re meant to feel as if you’re on deck. The floor is wooden, there are some examples of chairs and a bell-boy’s uniform (to be a totally immersive experience I would have loved a G&T brought to me while I led on an actual recliner!) The whole of the wall is a projected film of the ocean, moving waves, the sound of sea-gulls and nothing as far as the eye can see; oh apart from a movement on the right. Gradually a steam powered liner comes into view and hey! It’s racing along besides us. There were many oohs and ahhs from people, then the inevitable selfies. It’s fun.

Afterwards walking through Hyde Park, back to Oxford Street to meet a friend for dinner, I saw so many lovely snowdrops. They are so delicate and as the RHS state are a very, very welcome assurance that the bright days of spring are on their way.

And this cheeky pigeon, who only moved at the last moment as I inched closer and closer. 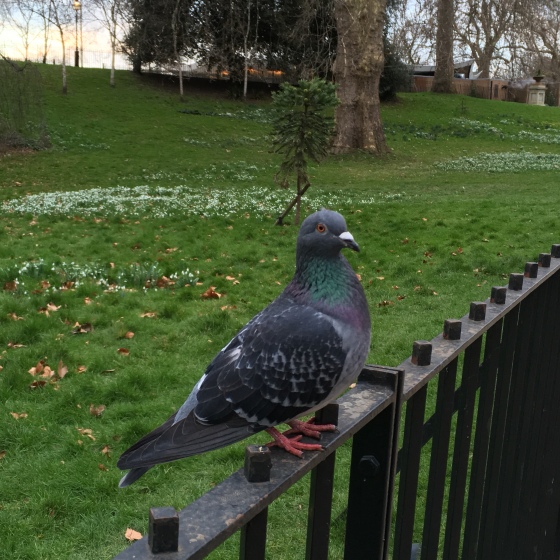 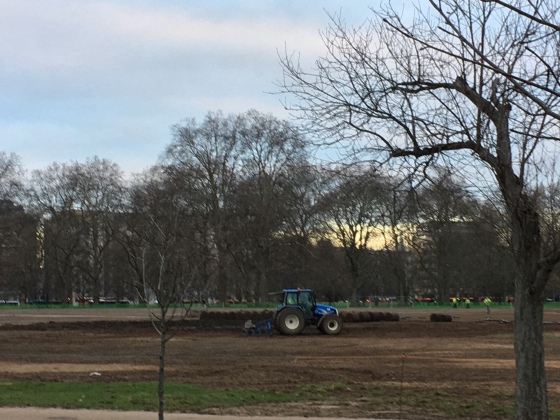 What an unexpectedly agricultural scene! There was a huge fairground set up in the park over Christmas, called Winter Wonderland (otherwise known as ‘be aware and hold on to your purse, while gaping at the exorbitant prices’.) So I imagine this is the process of flattening and fertilising the area before it’s re-turfed.

An eye-catching memorial for Remembrance Sunday leftover from November, while we were wandering around Witney market on Saturday. I like the mixture of felt and yarn. It looks good still. Often yarn bombing looks bedraggled and dirty quite quickly.

Now I’ve only got 3 more teeth left to knit of my Hitchhiker, so hurray! Nearly done (again) and then I can start something else. Recently I’ve decided that having one crochet and one knitted thing on the go is good. I don’t really want any more than that at one time. It’s handy to have a choice, especially for knit night when it’s chatty and I need to concentrate. Something you can do without lots of looking is good too, as it’s not well lit in the pub at this time of year. Have I said all that recently in another post? Sorry if I’m repeating myself.

And in a nutshell, at the moment I’m watching: Feud, a BBC drama series about Bette Davis and Joan Crawford, reading: Cranford by Elizabeth Gaskell, listening to: Three Things about Elsie by Joanna Cannon and tonight I’m cooking aubergine biryani.

What about you? What are you watching, reading, listening to and cooking? I’m genuinely  interested.