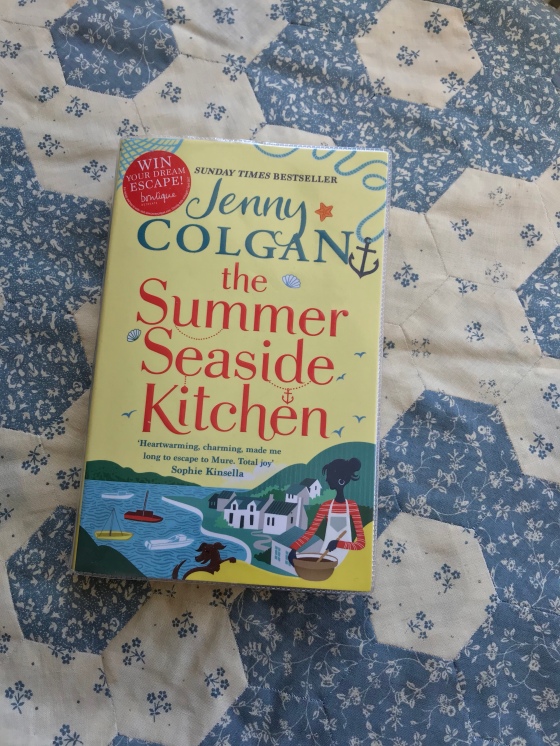 Recently I came across The Endless Beach by Jenny Colgan, the sequel to The Seaside Summer Kitchen. I first read the book above last year and remember really enjoying it as we travelled around the Highlands of Scotland. Likeable characters, a beautiful setting and heavenly descriptions of locally produced food. What’s not to like? I came across this copy in the library and thought it would be nice to refresh my memory about the characters, and what happened, before reading the next. I’m not saying it’s a complex read; it’s a lot like many of Jenny Colgan’s recent books in fact, but I like the warmth and gentle humour. This is a pretty perfect summer read.

On Tuesday when I read about Flora making oatcakes, I found I had flung down the book, run to the kitchen and turned on the oven before I really knew what I was doing.

“I’VE GOT TO MAKE OATCAKES!”

At Christmas I’d come across the recipe in Nigella‘s Domestic Goddess cookbook, that I’ve owned since it was first published, I had idly wondered about making some, but hadn’t got round to it with the frenzy of seasonal shenanigans and wrapping up of piles of presents.

Now I don’t think I would ever really want to buy them again, they are incredibly easy to make and very tasty, without the somewhat cardboardy texture of shop bought versions. A little bicarbonate of soda (aka baking soda) gives them such a satisfying crunch.

I’ve now made four loaves of sourdough bread! Two white and two wholemeal. I’m hanging up my oven gloves for a week or two. Everything in the kitchen is covered in flour and quite frankly we need to eat only salad for a bit. My sourdough starter is lying dormant in the fridge for a little holiday now.

This was a loaf I made on Friday. It’s far too good toasted with honey! 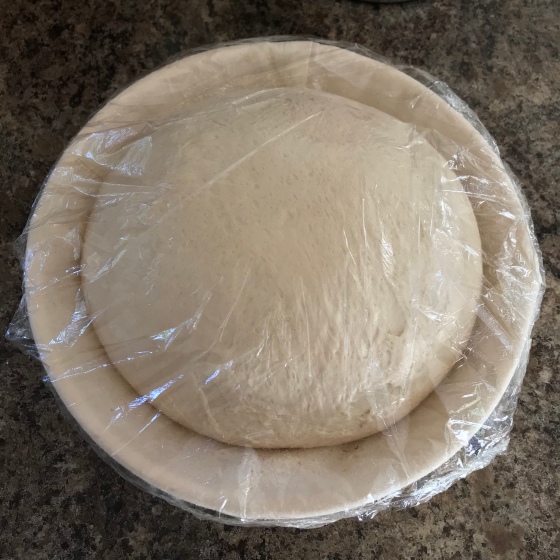 After looking in many shops for crumpet rings I ordered Lakeland’s set of four. It’s good to support your local high street shops, but only if they are selling what you need.

This morning I used up all my discarded sourdough starter on a batch.

I’ve found pouring the starter into a plastic measuring cup is a very fuss-free fast method, rather than faffing about with scales, but it’s easy enough to convert the quantity to ounces or grams if you prefer.

Whisk up the sugar and salt into the starter in a large bowl, then add the bicarb. The mixture will froth up and increase.

Heat an oiled non-stick pan on a low to medium heat. Add well oiled crumpet rings and barely half fill them with batter, it will rise so you need space for them to grow.

When they’re slightly shrinking back from the edges of the rings, with bubbles appearing and look drier on top, lift the rings off using tongs.

If the rings don’t slide off easily give the crumpets another minute or so to continue cooking. Flip them over briefly to colour the tops.

Cool on a rack and toast. Or eat hot right away! They’re better toasted I think, as you get crispy tops and bottoms which contrast nicely with the fluffy insides. Try a few and see which you prefer!

This quantity made about 16 crumpets.

I played with the temperature of the pan as you get more bubbles with a slightly higher heat, but don’t want the bases to burn.

I’ve been reading some tips and it seems you need a runnier batter if you want more holey crumpets. You still start with a 100% hydration starter but play around with the crumpet batter. By the way, that slightly scary mathematical term simply means you’ve fed your starter with equal quantities of water and flour. It’s nothing more complicated. I discard about half of my starter (putting it into a bowl, or loosely covered container, in the fridge to save for making pancakes or crumpets) then feed the remaining with 100g flour and 100g water which is equivalent to 4fl oz on my measuring jug. 4fl oz is the easiest to read and so is fast in the mornings. I know it’s a mismatch of imperial and metric, but whatever works, works!

I’ll get back to you if I find an amazing fail-safe realllllly holey crumpet recipe. Mine came out light and fluffy with enough holes to identify them as crumpets I think. I liked them very much. Too much, if you know what I mean…

The evolution of crumpets 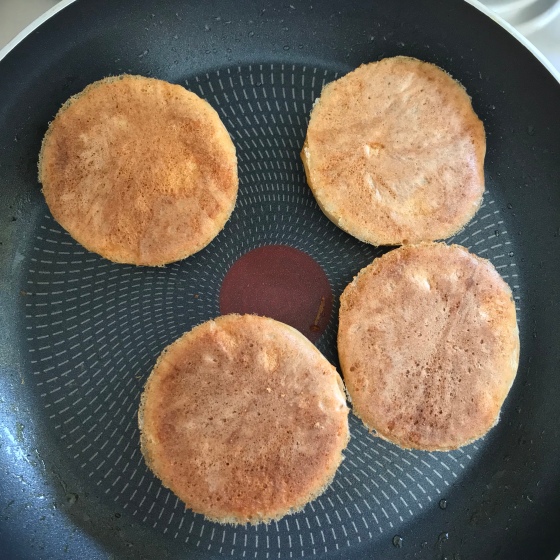 What about you: what are you enjoying reading and cooking at the moment?