🎶 “The hills are alive with the possibilities of crochet!” 🎶

I’ll write up all the yarn colours, my motif design and everything you might want to know, plus photos, next week. I plan to block it on Monday, and hand it over wrapped in Christmas paper soon after…

Just after I blogged the other day I had an email that felt spooky in its timing, it’s dead exciting and absolutely perfect. That’s all I’m saying, for now!

‘Its the final countdown!’ Yes, I’m singing. Typically in the summer I don’t crochet nearly as much as the rest of the year. I think it’s counter-intuitive when it’s so hot; I just don’t feel like having a big woolly blanket on my lap but I have done little bits and pieces to my border.  Now I’m on the penultimate round, nearly there. In fact I can see the initial stitch of the row ahead of me! I can’t tell you how good it is going to feel to finish this blanket. It’s been a work of love, but also I feel I haven’t been able to start anything else crochetwise until it’s finished.

When it’s completed I can imagine me doing a Maria; running out into the countryside flinging my arms in the air and singing the hills are alive with the possibilities of crochet!!! 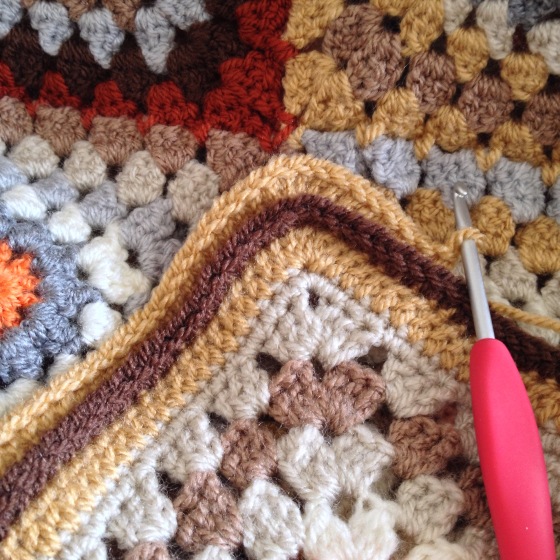 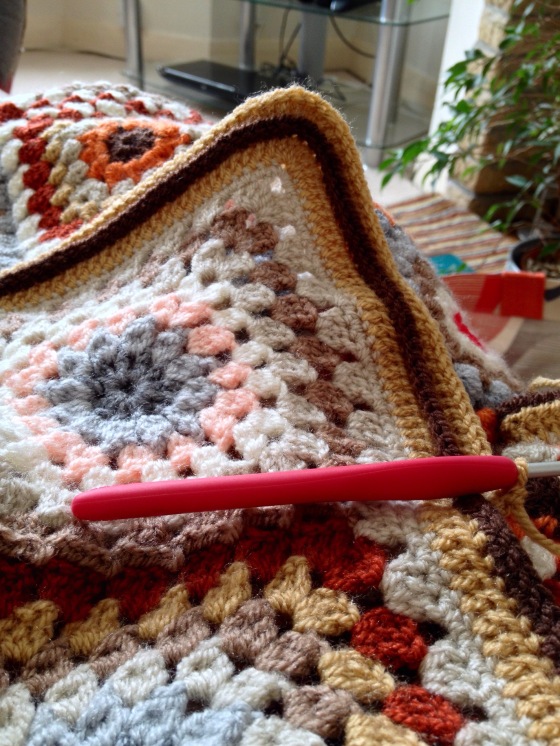 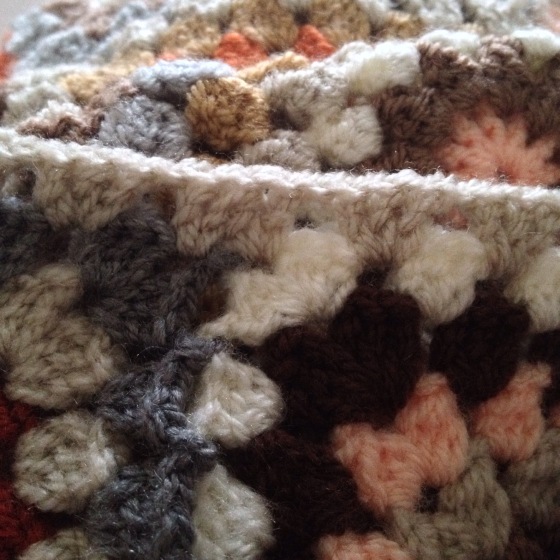 After undoing my rows of border three times I wailed HELP! to my crochet buddy Rachel. I’d first chosen a border from this book, wasn’t happy with how it looked so went with my own design, wasn’t happy so redid it and found on my third attempt and the third round (after a lot, a lot of crochet) that it was puckering. Frilly edging appeared because there were obviously too many stitches. When I made my Tilting Squares blanket I didn’t have the same problem at all….

Rachel immediately sent me a pic of her blanket showing a JAYGO join and border, with instructions for a fab little solution. She had seen this on a blog ages ago and mentally filed the technique away. So, when having similar problems with her border she remembered what to do: treble one stitch on the left hand side of the join, then treble two together – with a treble placed on each side of the JAYGO join – then make a final treble. This leaves only 3 stitches for the next round, but is wide enough to straddle the seam without being too tight. Can you see mine in the photo above?

I’m passing on the tip because someone might be having the same issue, right now.

Something rather momentous is happening this Saturday morning; finally it seems the procrastination is over.

What are you up to?

My William Morris inspired motif blanket has been keeping me occupied during the evenings this week. I’ve crocheted a jaygo row each sitting and when I realised I’d done the last row I felt jubilant. This has not been a swift make with all those ends to darn, plus the fact that I designed my own motifs after making a quarter of the original blanket.

Next I need to darn in two ends of yarn for every block then steam block it in sections to get it to relax and motifs to line up. Lastly it needs a border.  I’ve planned the overall size to be roughly 6′ by 4′ so it can be a good sized blanket to snuggle in, but also for the intended use of going at the end of a double bed. It coordinates with a pair of William Morris design curtains; which explains the colour scheme and its name.

I look forward to wrapping it up in Christmas paper (“Think of it as delayed gratification” I shall say) and presenting it to the person who asked me to make a replacement blanket for the now slightly moth eaten one her Grandmother (my Great-Grandmother) crocheted for her when she was a teen, who chose the colours and who has (mostly) waited patiently for its completion.

Wondering: who buys these blue flowers?! I posted this on IG and one commenter summed the artificiality of them up perfectly in one word “Bonkers.” Indeed.

Making: fast progress on my ripple. It’s a Christmas present and so is the motif William Morris inspired blanket. It’s full steam ahead with the hook. I’m enjoying the 1,2,3,4, 2, 2 rhythm and it doesn’t feel like a task in the slightest.

Funnily, after cancelling my sub to Simply Crochet, and not buying a few issues, I now find I’m downloading the digital copies. It’s excellent because I no longer have hundreds of post-its poking out so I can go back and look up websites and blogs; you just touch the active link and it takes you to the page. I have a too good to refuse digital sub for Inside Crochet magazine too. The patterns in the brand new issue of SC seem of a good quality. There are lots of pretty clothing and useful patterns. The skill level for many patterns has increased which is good for those who’ve been buying it since the beginning and are now crocheting at a higher level. BUT I’m not making anymore bobble mitts or shawls until the blankets are done. Famous last words? 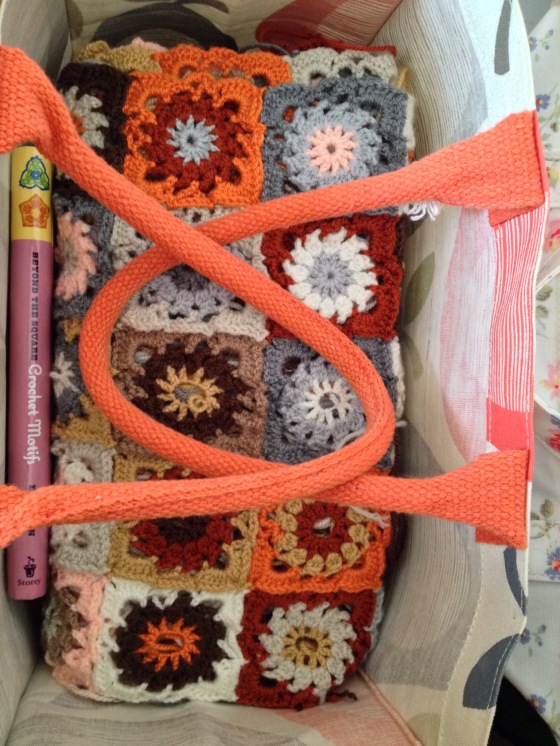 Looking: at my bags of woolly wotsits stowed away at the end of my sofa, they’re a pretty nice sight.

Deciding: to save my yarn ends as I snip them after darning as I’ve seen some great ideas to do with them such as: gluing them over a mould and making a bowl, tying them together to make a scrappy yarn ball or putting them out in the spring for bird nest building. I’m not completely convinced at the wisdom of lots of acrylic floating around outside as I don’t know how degradable it would be, but brightly weaved nests creates a pretty mental image. It’s going to take me a while to gather a jarful anyway.

Feeling: happy that my car has been double checked at the beginning and end of the week, as the brakes suddenly felt very, very odd one rainy dark night when I was driving home from evening class. Stomach lurching is the best term. They feel fine again so hopefully the blip has been sorted.

Anticipating: Saturday or Sunday brunch; an egg and bacon bap. It’s a dynamic eating experience. You have to be prepared for total yolk explosion, but that’s what the last bit of bap is for – mopping the plate! (Do the no-no etiquette thing and tuck your napkin into your top!)

Reading: Killing Floor by Lee Child. What can I say? Lee Child was on the book club on Simon Mayo’s Radio 2 show talking about his 19th Jack Reacher novel. I wondered what they were like as many people must be buying them if he’s onto the 19th. I downloaded the sample of the first book and as they cannily do it stops in a really gripping paragraph. Of course I bought the rest of the book and was hooked. Child writes in staccato sentences, there is rarely a comma which adds to the power and pace of the writing. Reacher’s just graphically killed 4 or 5 crims in one evening, and he’s a ‘good guy’, so it’s not writing for the faint-hearted. I might just have to look out for the second in the series sometime.

Hoping: to meet up with a crochet peep, or two, in the next month. After being in contact through social media for ages it’s time to have a coffee, cake and craft together in real life. Weeeeee!

Baking: cheese scones are planned for the weekend. I write a pledge card each birthday listing a number of things I will bake or cook for Someone, some are specified like cheese scones, others are named recipe books from which I will make a certain number of dishes. It generally takes a year to the next birthday to cook everything on the card as I just do one occasionally as the mood takes. I’ve found the card is filled in with the chosen recipes and page numbers pretty quickly, then it’s popped under a magnet on the front of the fridge. It’s a fun birthday present, and I find it encourages me to use new or neglected cookery books. I also get to eat the dishes too. Win, win. I drew the line at saffron fish balls though last year.

What are you up to? Link to your snapshot post in the comments below if you’re inspired to write one, I enjoy reading them.