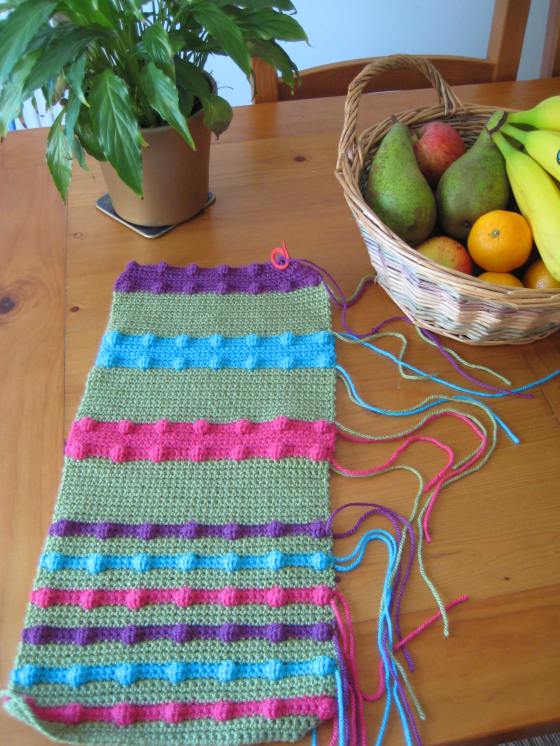 M: “That’s really different, I like it! The green is lovely”

Court jester and lack of style aside, this is actually not the softest scarf you would want against your face, especially when it’s mostly double crochet as it makes a dense fabric. It feels slightly scratchy. Stylecraft works well for blankets, hats and probably gloves too but perhaps not scarves? (Shame as I have another Stylecraft scarf on the go, but it’s not a dc heavy pattern so might be ok.) I need a gorgeously soft merino type wool to make another version of this bobble scarf. I’ve written down what I did so that’s not a problem, but the purse jangling with coppers might hold the making back a while.

In the meantime I made a cover for my iphone yesterday, using my new found knowledge of spike stitch. It’s my own pattern, which means that it might be a bit dodgy, but for me it’s very early days of designing my own things and you have to start somewhere. Let me know if you try it and if you find a glitch.

>Chain 13
>Dc into the 2nd ch from the hook and to the end of the chain. (12 dc)
>Ch1 then dc into each dc – repeat this row three times
>Change colour (I didn’t cut off the yarn, I just carried it up the side and picked up the colour as I figured the strands carried up the side wouldn’t show when it was made, and they don’t, so there wouldn’t be huge lots of darning) and work alternating spike stitch then a dc along the row
>Dc into each st of the previous row – repeat this row three times
>Change colour and do another row of spikes, I alternated mine so they are staggered with the previous row’s spikes but you could do them above the others
Carry on the pattern until the strip is long enough to fold over your gadget, I did 14 stripes
>SS across one top edge to make it a bit thicker then dc the sides together with the ws together (I like the dcs on the outside, but you could sew yours up inside out or, or dc it rs together if you don’t want to see them)
>Turn the cover inside out, cut the wool to leave a long tail to use to dc the other sides together, thread a needle and weave the end through stitches at the bottom of the cover
>Turn it back the right side out and dc the other two edges together
>SS along the other top edge, fasten off and darn the ends in.

~~~~
What are you making this weekend? Crochet, sewing, knitting, cooking etc etc? I love to know as I’m basically a very nosy person.