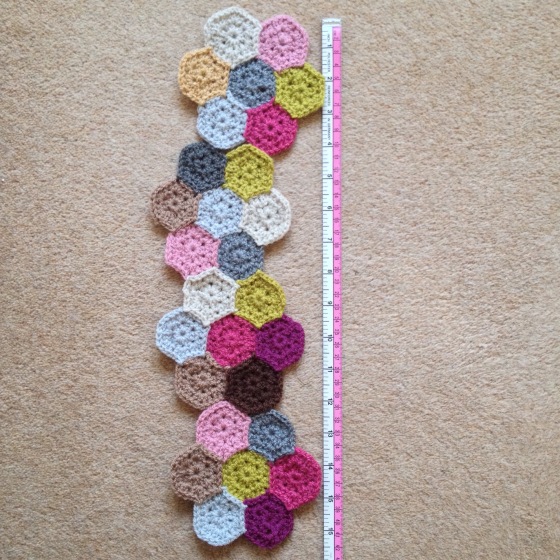 This is a progress photo from earlier in the week, it’s 28 days worth of a baby hexagons. Well, what can I say? They are addictive and so easy to make! But LOOK – 28 only measure just over 16″, so for a decent sized blanket by 31st December we’re going to need to crochet one a day, plus lots more! 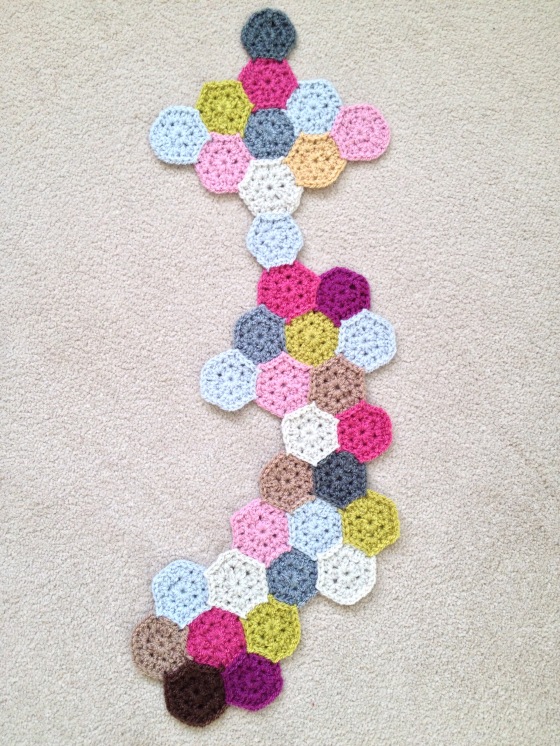 So now I’ve kind of abandoned the whole baby hexagon a day concept. Although a one a day CAL is a lovely idea I don’t think this one was properly thought through measurement-wise. So now I’m just doing a batch when I feel like it, and I plan to continue this throughout the year. It’s impossible to just make one a day anyway, the one turns into five or sometimes (prepare yourself) I don’t feel like crocheting anything at all.

Isn’t it turning out pretty though? I’m using leftover yarn from my zesty raspberry ripple blanket and pinching colours that I’m using for my motifs. It will change though as the plan at the moment is to add new colours from whatever I’m making in Stylecraft as the year goes on. 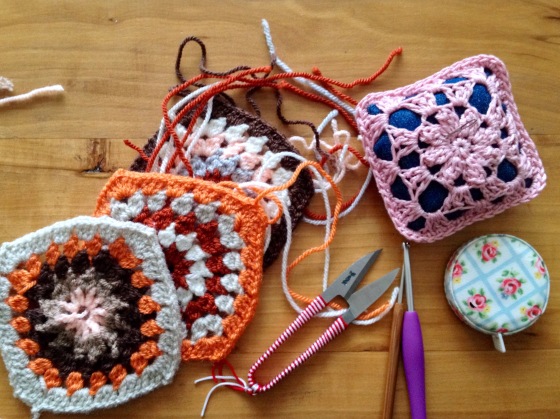 When I decided to redesign my William Morris colour inspired motifs I was slightly panicked by going from a blanket which was a third complete, with a basket of semi-finished motifs to absolutely zero. So I hooked new versions without pausing to darn any at all. Argh! I ended up with so many ends that I’ve had to stop and do nothing but darning. Argh! On Sunday I divvied the remainder into seven little piles to tackle like homework each night. I missed last night because I was out, but it’s a good idea to tackle the last of a tiresome job in small bits. For the next fifty motifs I will make one, darn it, then move onto the next. I really will. 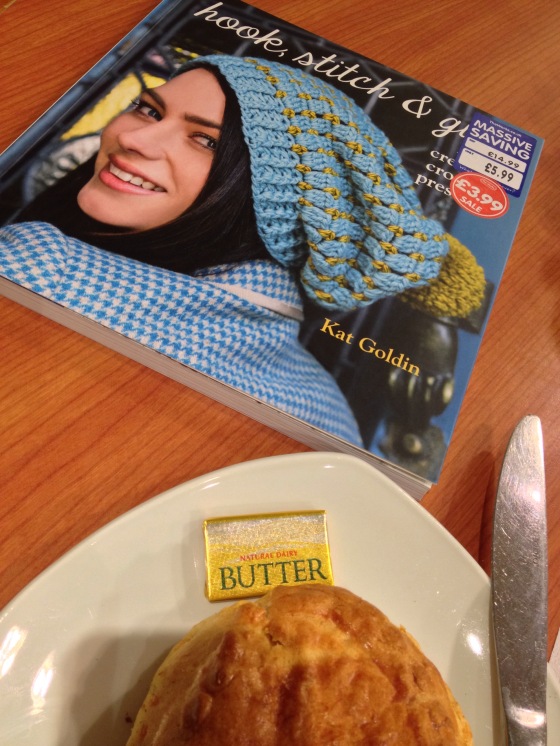 I saw my dentist last week “Ah you always have stunningly good teeth” he said before I even opened my mouth! Afterwards I bought a bone handled 1935 cake knife made to commemorate the silver jubilee of George V who was the Queen’s Grandfather. It was a bargain £4, after some Googling it seems most online sellers are asking £15 plus for one! I bought it because I really wanted a cake knife, rather than grabbing the first knife which comes to hand when we have guests, but what a lovely find.

This week I’ve had an eye test. Have you ever been shown photos of the back of your eyes? It’s amazing being talked through how they can tell you probably haven’t got diabetes or glaucoma, and seeing your optic nerve captured in action. I hate the puff of air and the flashing light so the new book by the very talented Kat and a cheese scone for lunch were my rewards! I’m thankfully now at the end of my mini MOT… 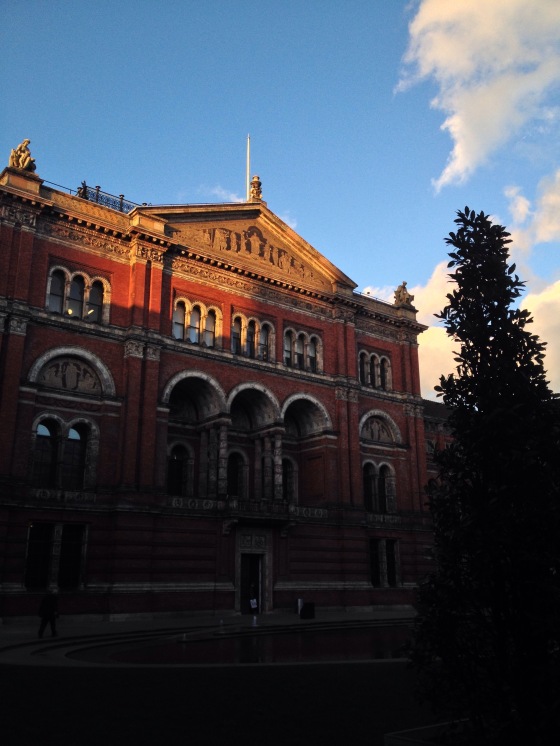 I’m so lucky to have been given membership to the V&A in London, officially known as The Victoria and Albert Museum. I’ve used my card for the first time and loved swooping into the Wedding Dresses exhibit with a simple flash of my card. Do go if you can before it ends. You “Wow!” your way around. I also visited the members’ room which was described to me by a room guide as ‘the inner sanctum’. It was certainly very peaceful and comfortable. The water jugs were donated by Waterford Crystal and even the tray is lovely! My membership includes a guest so I’m hoping to take friends and family to events over the year. Thank you Father Christmas. 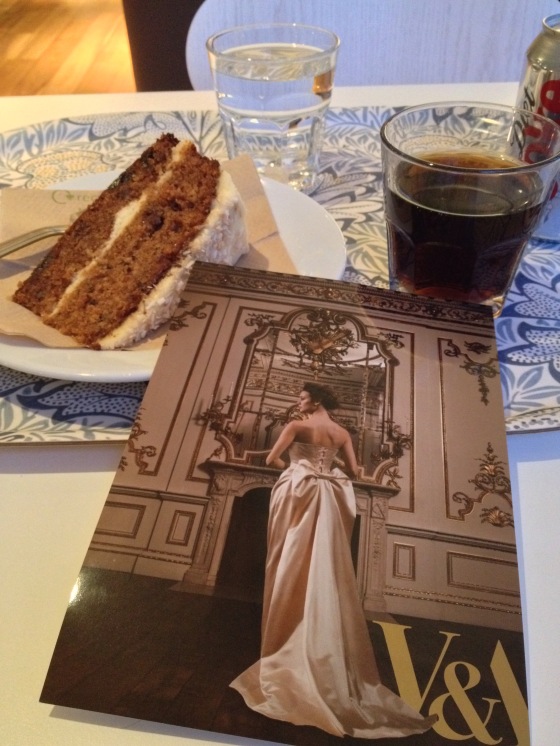 I’ve baked my first loaf of Artisan bread in my new cooker. I started to use silicon coated baking paper last Autumn because you can place it gently down into the heated pyrex while safely holding the strips of paper. I adjust the oven temp down to 220 oc from the recipe’s 230 oc to comply with the paper’s instructions, but this oven has a much better seal and there is a huge gust of steam as you open the door. I’d quite forgotten ovens do this and have had a hot facial a few times. The problem is this time the paper became melded to the bottom of the loaf. It might have been a wetter dough than usual, or the new oven. While I’m not fussy I don’t like the chewy texture of silicon. (Yes, I did try it.) So I might go back to gently plopping the loaf in sans silicone because it’s a tragedy to have to cut the crust off. 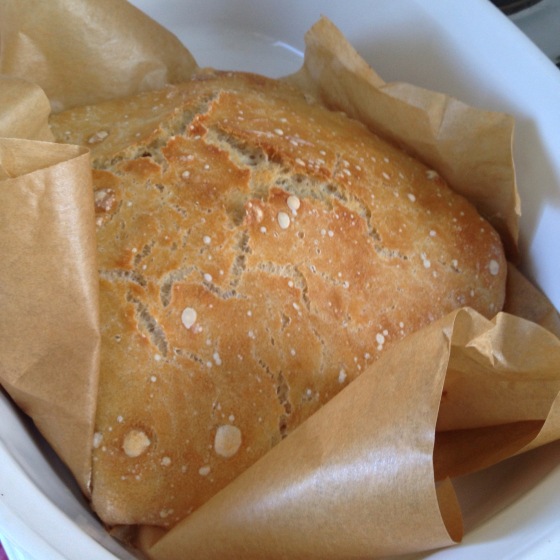