I came back from Yorkshire last night, after a fantastic 4 days there. I really love that part of the country! I’d booked a ticket to go to Yarndale on Saturday and felt really excited. I didn’t go last year but went to the first Yarndale 2013 and was interested to see how the festival might have developed.

When travelling to Skipton what really amused me was the sheer number of Cath Kidson bags on view on the train. There weren’t as many woolly items being worn as I see en route to the Knitting & Stitch Show every March; as we’re enjoying a late Summer at the moment. I love anything Cath Kidson and so loved seeing them all. There was such a party atmosphere on the Leeds – Skipton train, with everyone talking about crochet, knitting and yarny matters, that the conductor asked where everyone was off to? He said he was absolutely loving seeing people talking to each other, not staring at their phones!

I caught one of the red double deckers from the station and this was the mandala hanging in the window. It was amusing to see people in town doing double takes as the bus passed by. I noticed a few taking photos of it too!

When I arrived at the auction mart at 1030 people were streaming in. There seemed to be many more exhibitors this year and it was more spaced out than in 2013, which was a good thing.

Once again I went to Fiona of Marmalade Rose gorgeous stall, where she was showcasing her felted wool pictures. They are works of art. I bought one of her cards. She is so talented. 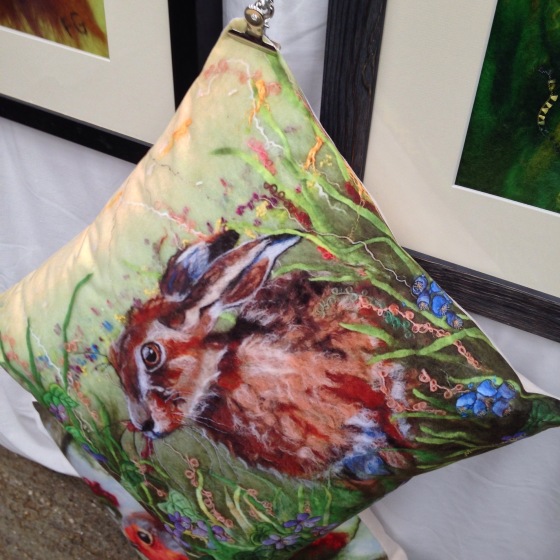 Some of the fabulous bunting! I tried to spot the ones I’d made, but it’s a few years ago now and I’m not sure I’d recognise all of them. I’m pretty sure I saw one or two, but wouldn’t put a bet on it!

The stunning Flowers for Memories displays were a real WOW. Here are just two panels. They were sent from 22 countries according to Lucy. Incredible isn’t it?

This is just a section of the auction mart, you can imagine how busy it became over the day. It was very good to go upstairs for a bird’s eye view of everything, and to take a few minutes out. There really were fantastic stalls; such a variety of goods on sale and really, really stunning displays. I don’t have any photos but keep an eye out for any of Eden Cottage Yarns since it was definitely one of the best. If not the best. 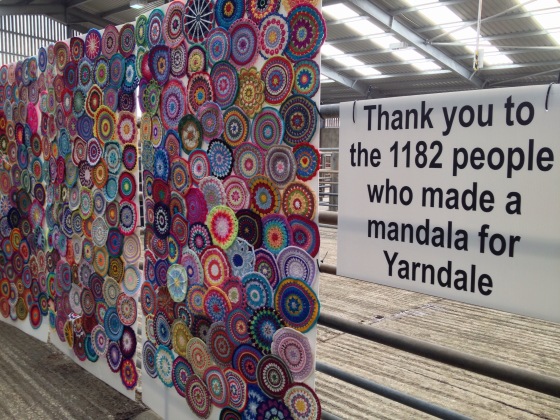 I chatted to people all day: said hello to bloggers I’ve long followed, fellow instagrammers, anyone who started to chat about yarn or craft related things and designers I admire. It was so good to finally meet Kat Goldin, though due to my rubbish sense of direction I kept passing her and Joanne Scrace‘s The Crochet Project stand; as I went around in circles, rather than up and down all the rows. By the end I must’ve looked like a deranged stalker.

Yarndale felt like one giant, fizzing, happy party. I loved it. But by mid-afternoon I felt completely overwhelmed and decided to head back to town, it had been great but I was ready for a quiet wander.

I jumped off the Yarndale express in the town and spent a huge £1 on a wooden door wedge at the market. I explored some of the lovely little independent shops and then popped in to Cooper’s Cafe, on the way back to the train station, and headed upstairs to Lucy’s studio. I felt a bit of a stalker again (and heard another saying the same) but it didn’t stop me looking around and taking some photos to show you.

I’m looking forward to seeing everyone’s take on this log cabin inspired blanket, the combination of colour possibilities is endless.

So familiar from Lucy’s blog, it’s a treat to see them once again in ‘real life’.

And there we are – my Yarndale experience. Or is it? Might there be more? Watch this space tomorrow…!