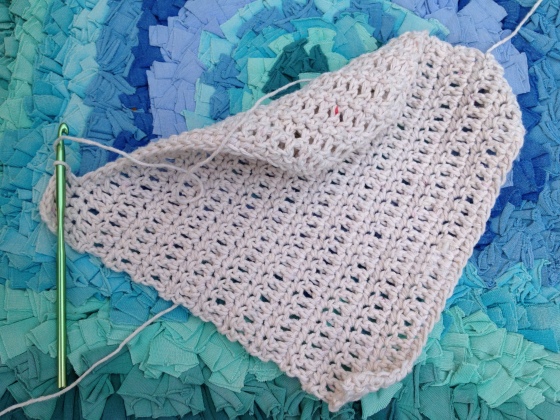 We’ve been having lovely weather here in the south of England after what was weeks and weeks and weeks of rain. There’s a bit of a festive looking forward to the Olympic opening ceremony vibe in the air at the moment too.

I had a request to crochet another dishcloth since the one I made in January has now come to the end of its useful life. So, I sat in the garden and whipped up a new one with my stash of dishcloth string. This time it’s rows of alternating doubles and trebles for extra strength and scrubability (new word invented?) 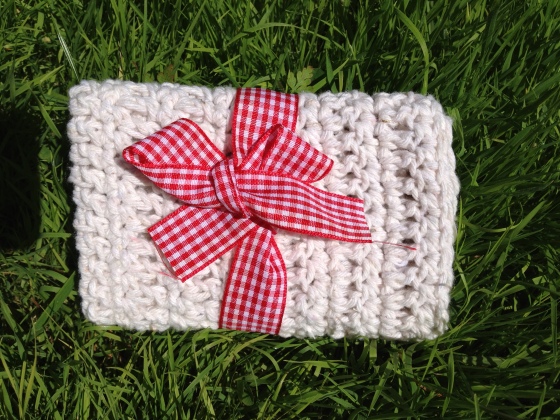 I’ve been making banana bread too…. 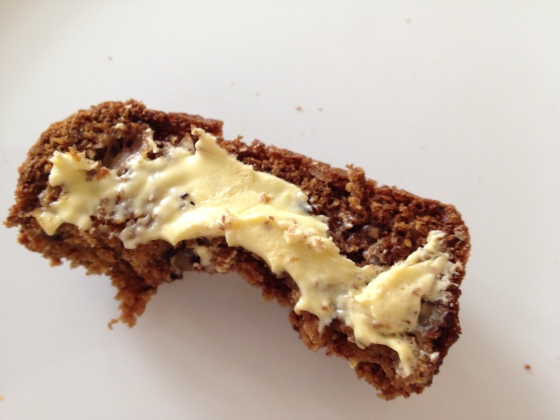 ….Nearly ate the first slice before remembering to take a piccy! Ooops.

Peel the bananas and mash with the lemon juice until smooth. Stir in the walnuts and leave to one side.

Gently melt the butter in a pan, tip into a mixing bowl with the sugar, oil and spice. Add the eggs one at a time, beating well after each addition, until everything is evenly combined.

Sift the flour and bicarb into a bowl, adding the bran caught in the sieve to the flour in the bowl. Beat half the flour into the egg mixture, fold in the banana and walnut mixture, then fold in the remaining flour gently.

Spoon into the loaf tin and smooth the top. Sprinkle some demerara over the top and bake for 60-70 minutes, or until a skewer comes out clean.

Dan Lepard recipe: taken from The Guardian…oh ages ago.

This is substancial but surprisingly light in texture.