Yesterday, on a beautiful crisp newly minted autumn Sunday morning, I sat up in bed all cosy listening to Liza Tarbuck’s Saturday radio show on the BBC Sounds app and undid every single stitch I’d done of my Coast Blanket while in West Cornwall last week (I told you its name would probably change lots of times) and restarted it.

I don’t want the square tilting so I had tried three different ways of turning each round and have now found a method I’m much happier with. I don’t think you can see where I’ve turned the hook and square? Tell me if you can see, I won’t mind. I won’t be undoing it again as I’m happy. I know no one visiting me and snuggling under my blankets would have noticed unless they were really looking, and probably non-crocheters wouldn’t at all, but they were bugging me. I’m a sometime perfectionist.

I can hear you shouting the word “Swatch!” And I’m shrugging back at you. 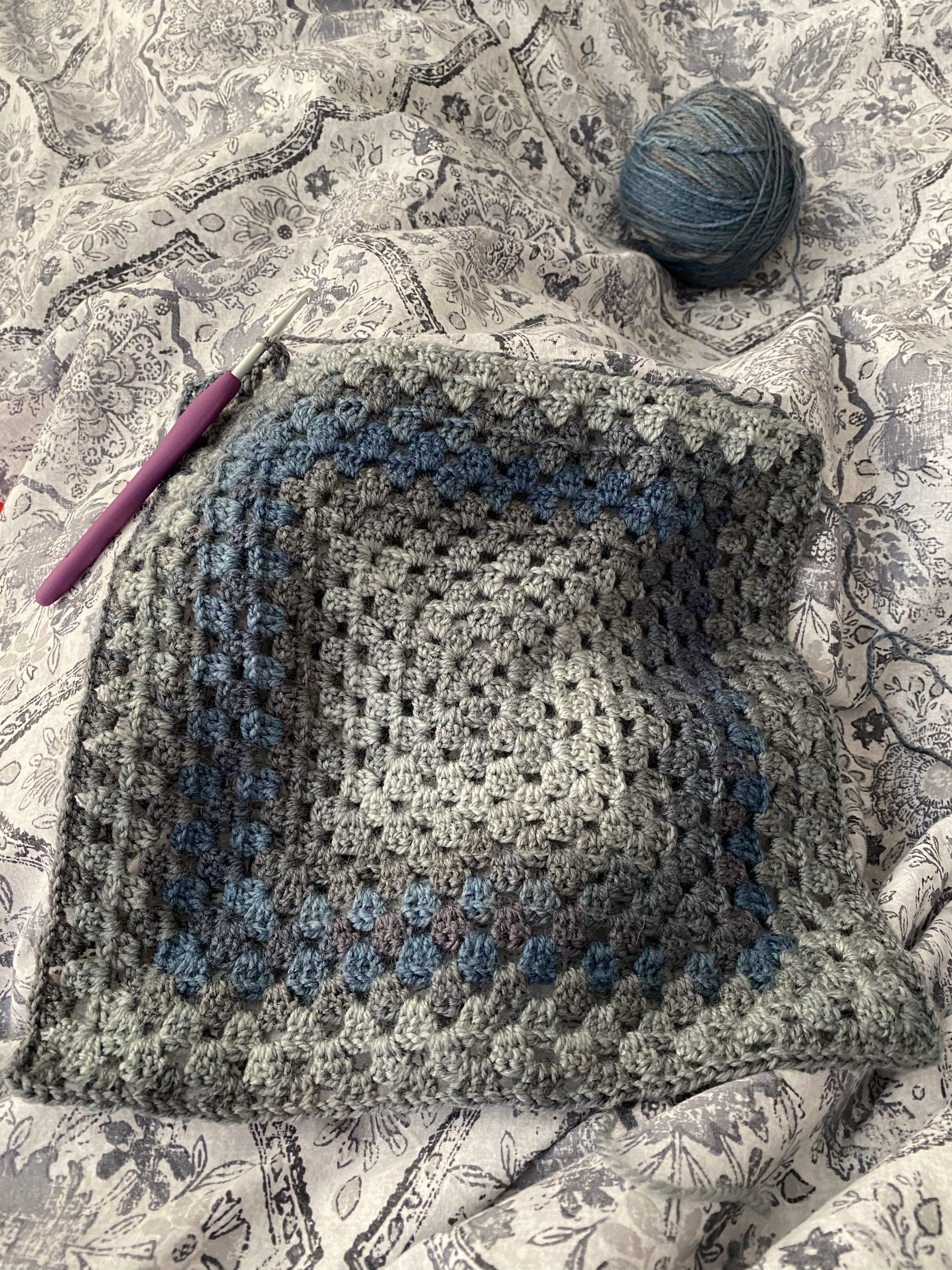 I managed to redo this yesterday. Too much for my hands but I enjoyed it. Today Ouch!

I’m one of a group of people on Instagram who are currently making simple granny square blankets. Motif, tapestry and intricate showy-offy colourwork crochet is all very well and good, but they don’t make the heart sing as much as a good old granny square! Sometimes plain and cosy is enough and beautiful in its simplicity.

I feel like I’m spotting granny square blankets on nearly everything I watch right now. For example: The Duchess on Netflix and Doc Martin on Britbox this weekend. It’s really fun to shout “CROCHET!” at the screen. I’m not sure how anyone else feels about this habit. I’m not asking because I don’t want to stop…

I believe crochet originated as a thrifty way to use up leftover wool from knitting projects, or to reuse it from old garments. I love it when you see people doing similar with leftovers, albeit in these times of plenty. That’s how I came to be making my Tilted Squares Blanket actually. I wanted to use up the remnants of the one and only yarn pack I’d bought when I was a new crocheter, before I started to choose my own colour combos.

I know my Coast Blanket isn’t in the waste-not-want-not category in the slightest (See here ) but I’m absolutely loving this Hayfield Spirit variegated yarn. I’ve never used variegated for a blanket before. It keeps it interesting seeing the colours change. There will be lots of multicoloured rounds as it grows bigger, but it’s so pretty I don’t think it will grate. There’s going to be fewer weaker spots, because there won’t be very many ends to darn in all compared to changing yarns on every round. Hardly any darning = big win. 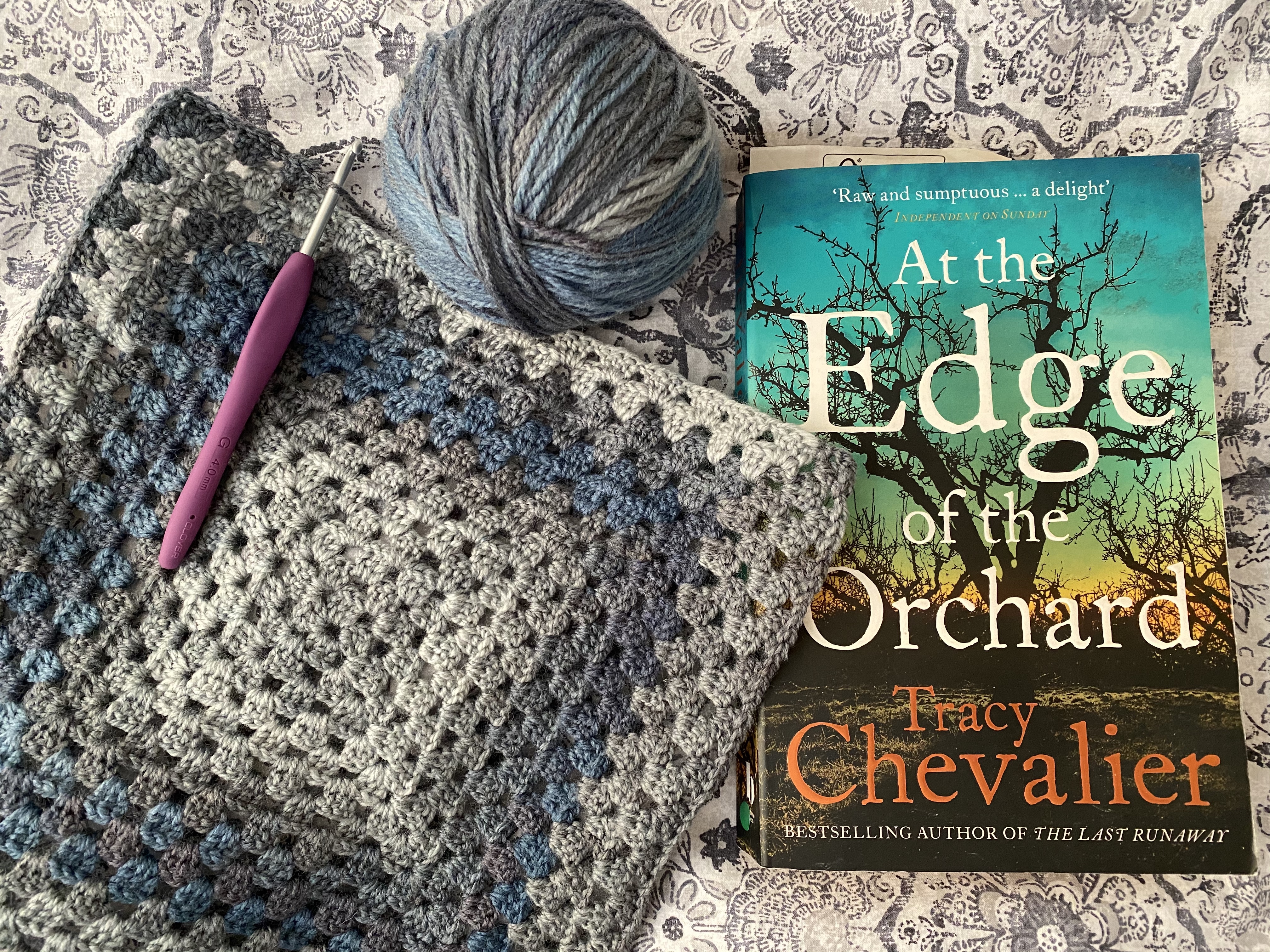 I think I’ve read or listened to everything Tracy Chevalier’s written. I love her blend of historical fact and real life people blended with fictional characters. You can visit or Google most of the places in her stories too.

I enjoy stories set in America, especially during pioneer times. When I saw this paperback in one of favourite charity shops for £1 I grabbed it for my holiday read.

1838: James and Sadie Goodenough have settled where their wagon got stuck – in the muddy, stagnant swamps of northwest Ohio. They and their five children work relentlessly to tame their patch of land, buying saplings from a local tree man known as John Appleseed so they can cultivate the fifty apple trees required to stake their claim on the property. But the orchard they plant sows the seeds of a long battle. James loves the apples, reminders of an easier life back in Connecticut; while Sadie prefers the applejack they make, an alcoholic refuge from brutal frontier life.

1853: Their youngest child Robert is wandering through Gold Rush California. Restless and haunted by the broken family he left behind, he has made his way alone across the country. In the redwood and giant sequoia groves he finds some solace, collecting seeds for a naturalist who sells plants from the new world to the gardeners of England. But you can run only so far, even in America, and when Robert’s past makes an unexpected appearance he must decide whether to strike out again or stake his own claim to a home at last.

I’m probably about 95% of the way through. It’s been a satisfying read, but I wonder if the story will abruptly end? There seems to be so much more to say and very few pages in which to say it. This is probably another way of saying that I don’t want it to end!

Joining in late with Ginny’s Yarn Along once again, but better late than never, right?