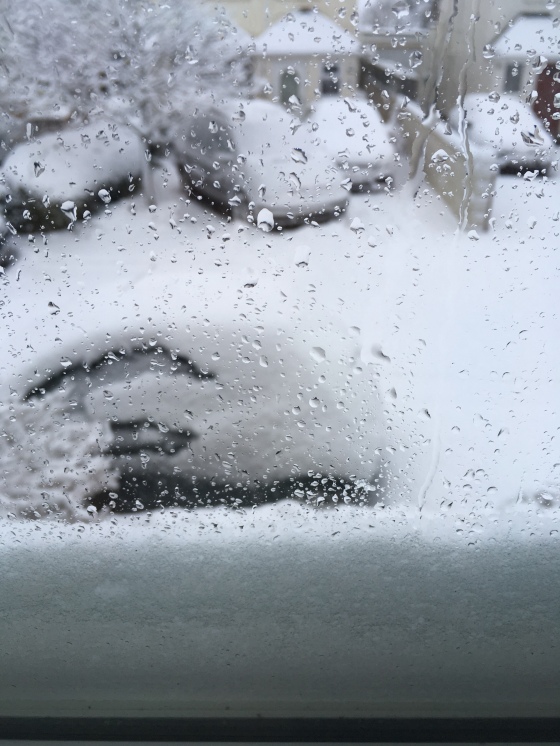 This is what I woke up to on Sunday morning when I looked out of the window. SNOWFACE! Apparently I always get an excited, wide-eyed, slightly deranged look when it snows. I took a few selfies when we went for a walk and oh I really do have a snowface! Maybe that will be the expression I wear for a  month when I win the lottery jackpot. 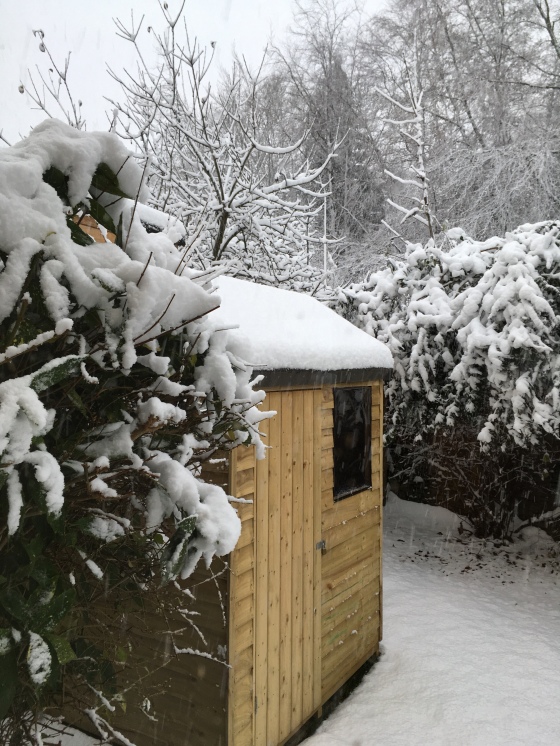 If you look to the right of the shed you can see that the snow was still steadily coming down. It carried on snowing all through the day. There was about 6″ when I took these photographs, it seemed to be falling at about 1″ an hour. 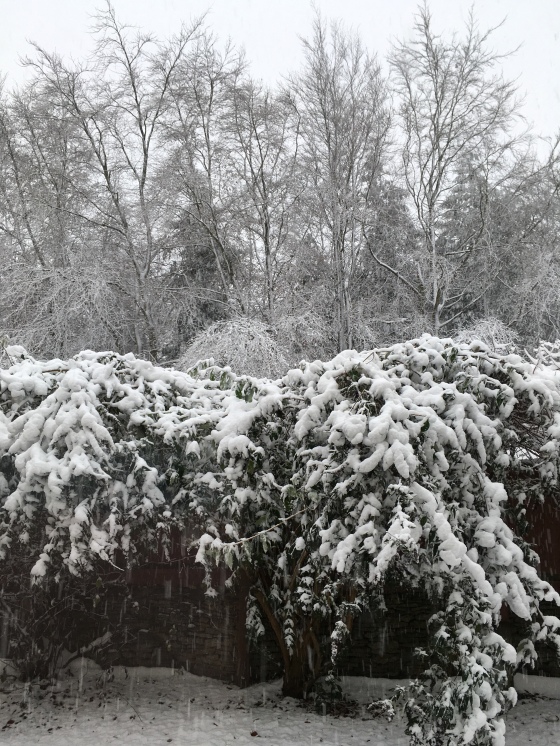 The birds were out in full force using our feeders, lots of blue tits ate the nuts. They really looked beautiful with their yellow and blue against the white snowy branches. At one point I saw four pinging about playing together. Sadly they were too fast moving to capture on camera. 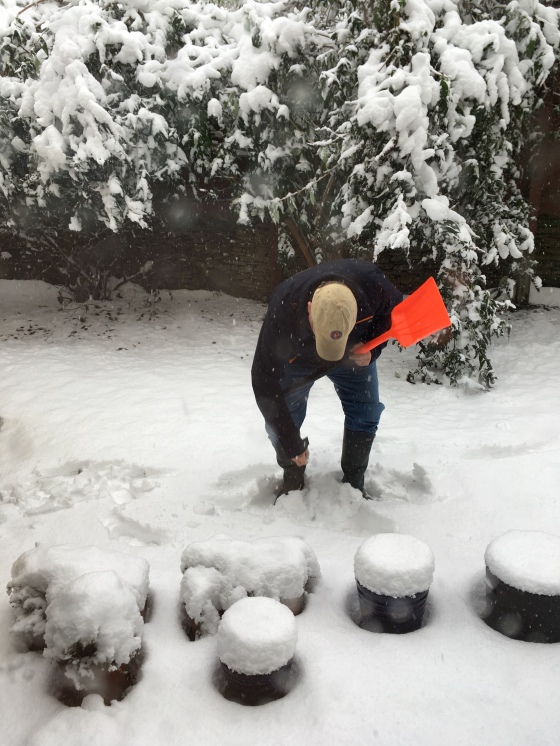 Someone danced about so much with the snow shovel, while I took photos, that he dropped the shed padlock into the snow. I didn’t laugh at all of course. Ha ha! 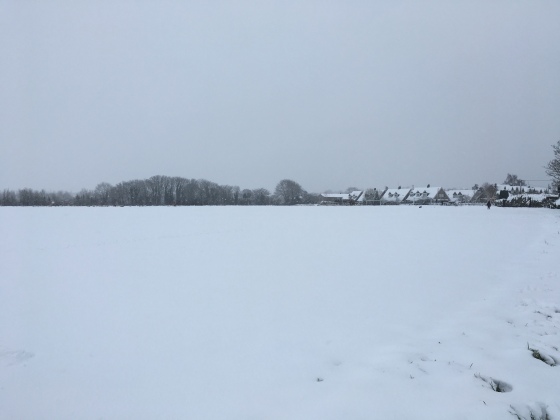 When I’m out and about in cold weather I have to work hard not to stare at people’s knitwear. I always fail spectacularly. There was nothing particular to report about the humans, but the dogs merit a mention. The sheer number of dogs wearing fair-isle patterned coats seem to indicate a strong trend. No, they weren’t woolly, but I liked this very stylish dog-wear. 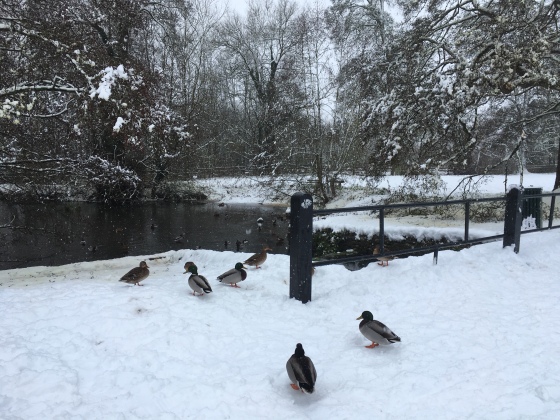 There were so many families were out and about with sledges.  They were mostly plastic but I did see some of those classic Victorian type sleds, you know; the wooden ones with metal runners. The kind that can really take off and make you wonder if you’ll stop before you hit that huge tree looming in the distance.

Facebook was full of jubilation on Sunday afternoon as some learnt that their workplace or school would not be open the following day, but there were quite a “bahs!” from others up in the north. This included my various Yorkshire friends who had been promised a huge ‘dump’ of snow, but didn’t have anything much at all. We get snow so infrequently here that everything grinds to a halt (my best January one year was when we ended up having five snow-days during the month. I know we staff were high with excitement, but I’m not sure the parents felt the same….)  The roads are not always gritted due to funding cuts and so turn into skating rinks, bus companies undertake safety surveys and usually err on the side of caution about running any services, trains can’t seem to cope with snow. Cars get stuck on motorways for hours; as people don’t know how to drive in ‘extreme’ conditions, so there are jack-knifed lorries and multiple shunts. I know this is laughable if you’re in Canada, for instance, but that’s England for you. 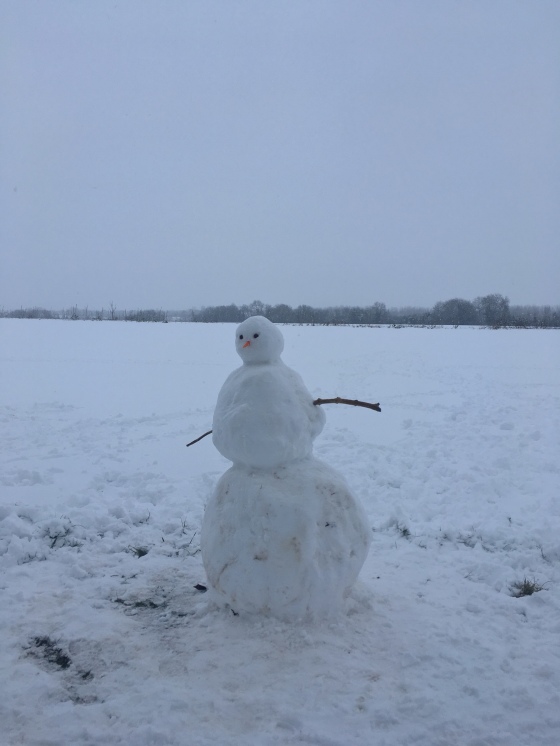 After an hour long walk in 1 degree temps I was pleased to get home and make a coffee. I used up the last of my limited edition Nespresso capsules. The type? Snowball! Coconut and vanilla.

I must do some more knitting as I’ve got to my last 10g of wool, so will be finishing my Mum’s Hitchhiker, just in time for Christmas. It always seems to be the same; I finish one thing after the other in a short space of time. Then the page will be clear for new projects, apart from the nagging matter of that half finished s—. I can’t bring myself to complete that word.

What’s the weather like where you are? Do you also have a snowface?!