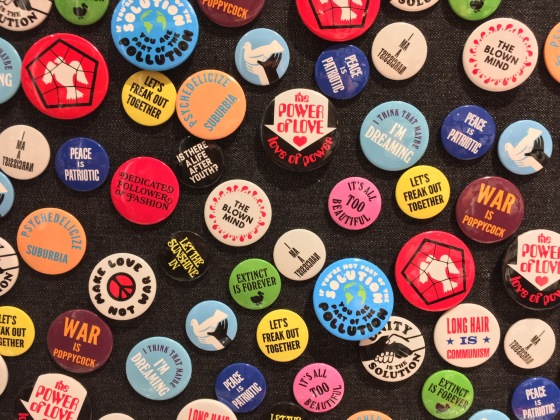 Yesterday I went to the fabulous V&A in London, officially: The Victoria and Albert Museum. The museum’s focus is upon decorative arts and design. The beautiful rooms are crammed full of amazing objects which you can see anytime for free, they also put on staggering good ticketed temporary exhibitions. I’m lucky enough to be a member and so can go into these anytime without booking and for free. Yesterday’s was the best I’ve been to: You Say You Want a Revolution? Records and Rebels 1966-1970.  There are many album covers from the period on display (I’d like a full list of these, must check the website) and many badges for sale in the shop at the end. You are forbidden from taking photographs in this exhibition, which turns out to be a good thing because you’re not distracted.

I went in at around 3:30pm, totally immersed from the start in the music and clips which automatically play on your headset as you move around the rooms, reading, looking, thinking. Near the end I led on a giant beanbag watching three walls of projected footage from the Woodstock festival, held in 1969 on a farm in Upstate New York, trying not to sing too loudly! It was a mesmerising exhibition. Noticeably no one had mobile phones out (this is rare anywhere, you’ll agree) and by the end I nearly fell on the floor with surprise when I looked at my watch and it was 6pm!

This is from West Cornwall last week. The colours of the sky, rocks, heather and gorse are stunning aren’t they? Quite a few times we saw cars left in gateways, off the tiny winding Cornish lanes, as people hopped out to take a photo of the same.

This my Yorkshire blanket, the first crochet I’d ever done, when I picked up a hook and tried making trebles. It’s pretty funny that the first crochet I ever did resulted in a full blanket! Mum made the starting ring and I carried on, with her help. It’s The Yorkshire Blanket because we’d hired a cottage there over Christmas 2008 and this is what I worked on, before going down with influenza (not “flu” which is typically a heavy cold.) I remember feeling like death warmed up for most of the time! No Christmas dinner for me, I was too unwell. That’s proper ill that is!

Anyway I’m really not sure what to do with this blanket, because we started off with the claret coloured DK single stranded. I carried on using a mixture of yarn that Mum and my Mother in Law passed on to me. Others I picked up from charity shops. It’s all acrylic and the tweedy appearance is because some yarn was thinner than others, so I ended up holding it double two strands at one time. Of all the blankets I’ve subsequently made this is still my favourite in terms of colours; it’s more ‘me’ I suppose. Of course there is a real discrepancy in weight between the centre of the blanket and the rest. It was initially a ‘can I learn to crochet?’ practice piece, but turned into a full square blanket because of course I could, and I couldn’t stop. It really doesn’t work with the weight of the outside rounds pulling at the lighter weight centre. There’s been no unraveling however. My darning must have been sterling!

So, I’m wondering whether to undo it and donate the yarn back to charity shops, crochet it all back up but with a two stranded DK centre, find out some way of undoing just the red centre and redoing it or……

And my current blanket, The Unnamed Ripple, as I sat in the shade a few days ago catching up with a few rows. This one’s going to a friend who lives on a canal boat, I ought to get cracking with it so she can use it this winter.

Don’t forget that if you’re in UK you can enter my giveaway to win a copy of Edward’s Imaginarium before noon on Sunday 25th. Leave a comment on the post linked here.