This is the second time I’ve started this post. I wrote a (witty, sparkling?!) paragraph or two earlier but lost it, probably due to the lunchtime glasses of prosecco, wine and amaretto during a family lunch. Ah well.

After seeing someone’s lace knit jumper in progress at knit group I decided to try my hand at feather and fan lace stitch.

It’s such a neat pattern – four rows repeated, including one row of purl, two of knit then a single row of yarn overs (yo) and knit two together (k2tog).

I rushed upstairs to the little room to take these photos when the sun came out, it was so bright that the desk looks yellow! It’s been disconcertingly still here after the huge storm Friday.

In fact I became so confident about this pattern that I took it to a new knit group last week. It’s not that tricky to stop talking and concentrate for one row is it? Maybe not for others! Actually a lovely girl there said she’s learnt the hard way never to take any complicated knitting because she’s lost count of the number of times she gets home and spots many mistakes!

Which is why after seeing this excellent tip about lifelines I decided to actually use them rather than tell all the knitters I know. It’s not just me that hasn’t ever heard of them. After undoing eight rows or so I’m now going to add them at regular intervals!

Can you see it? I’m hoping it won’t be too tricky to pull out at the end, maybe I should use a shiny cotton rather than another wooly yarn which might mesh together with the fluffy Tosca Light wool blend I’m knitting. 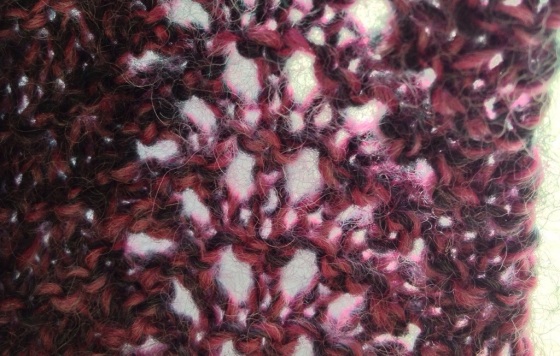 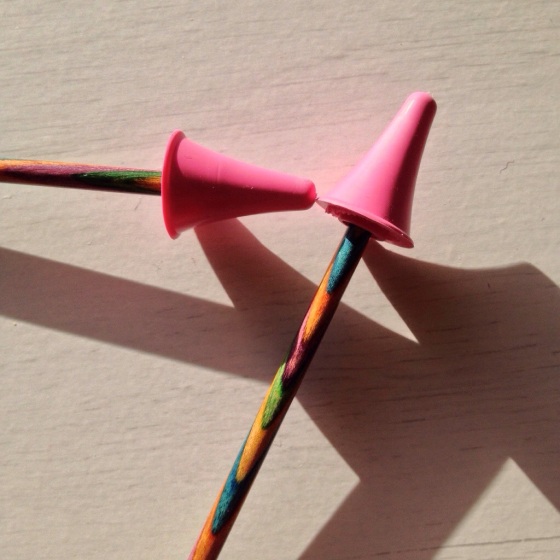 These rubber ends by KnitPro have been handy for when I’ve stuffed my lace knitting in my hand bag and rushed off to catch a bus. Can you imagine the horror of your knitting slipping off needles and unravelling? Eeeek.

The Winter Olympics ice dancing is incredible! I’ve been watching while I write this post. Do you also get sweaty hands and feet while you watch? I feel nervous for them all.

Have you had a good weekend?

One thought on “Feather & fan”