I experienced a strong sense of déjà vu as I finished off the thumb of the second fingerless mitt of the second pair. It only takes an evening to knit one mitt and is so economical on wool. I’ve still got 34g of a 50g ball of Rowan Tweed left! That’s 4 mitts out of 2 50g balls, with more than half of one left over. I know – it occurs to me too that I could retype that much more simply! 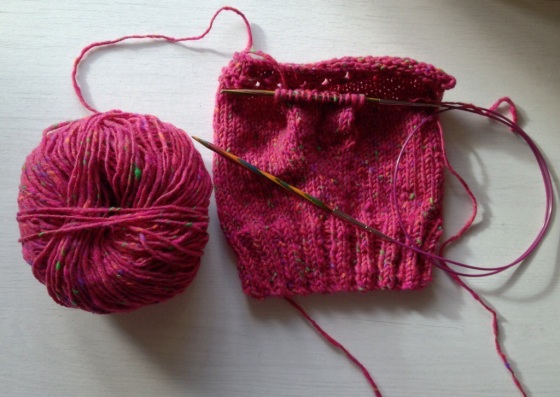 I’m going to have another go at mattress stitch and make sure I line up each stitch really carefully. The tweeter of Inside Crochet and I had a good ole chat about it. Apparently Claire Montgomerie, the magazine’s editor, is obsessed with MS. I can see why – it’s so fiddly but produces a really good seam.
I’ve got a few relatives with little hands so I have a recipient lined up to offer this pair to at the weekend. But it would be easy enough to use a larger size pair of needles, or scale the pattern up by a couple of stitches if you haven’t got small hands! 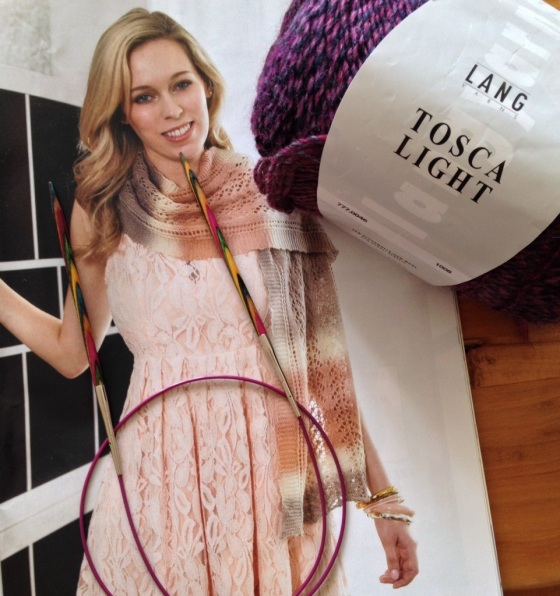 A knitting group friend wants to accomplish her goal of learning to knit fair isle this year. I knew I had various patterns tucked away in my magazine hoard in The Little Room so had a good few minutes flicking though copies. It’s so worth holding on to patterns because you never know when you’re going to need inspiration. Hmmmm I am running out of space for magazine holders though! I’ll have to move over to all didgey copies soon. I found a selection of patterns for her but also distracted myself with the Knit Now mag (issue 25) pattern above. The colours are not me, not at all, but I fancy some lace knitting. I did say I wouldn’t make anymore scarves, but hey over the course of a year you end up wearing them all really, don’t you? It fits in with my plan to use up more of my modest stash too. I’ve got a few balls of my favourite purple DK yarn Tosca Light so I’m going to use 4.5 mm needles and see how it goes. The pattern is for 3.75mm needles and 4 ply but suggests trying all different weights of yarn.

Somebody went to Cuba for a week and on the first day I had a knock at the door early in the morning. It was an Amazon delivery of a Kindle Paperwhite and accessories, no doubt meant to distract me from remembering to nag about too many cigars, rum and sun from fishing! I’ve got a few Kindle books already as I’ve tried them on the ipad app. I’m addicted to scouring the Kindle Daily Deals and have bought stunningly good books for 99p or less (49p has been the cheapest so far.)

It has sewing (patchwork) too. What’s not to like?

I must get on with casting on the scarf as I’m going to another knit group and want to get to grips with the pattern before I go. I’d like to blog about my knit group crawl, trying out all the local groups, along with various friends, but it’s potentially social suicide. How could I resist telling you about some of the characters and (bit weird) happenings without maybe shooting myself in the foot? I’ll have to write a novel one day….

What are you reading? Can you recommend any good Kindle reads?

5 thoughts on “The knitty gritty and reading”