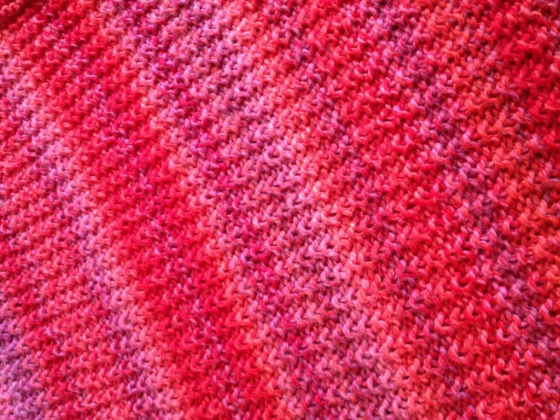 Isn’t the yarn lovely? It’s a wool blend (51%) and is Sirdar Escape Chunky, bought with my gift card from Black Sheep Wools. It’s just so warm and soft, not at all itchy. It’s a little on the fluffy side – when I hoover after knitting there’s a circle of reddish pinkish fluff on the carpet by the sofa – so I should perhaps wash the poncho soon. 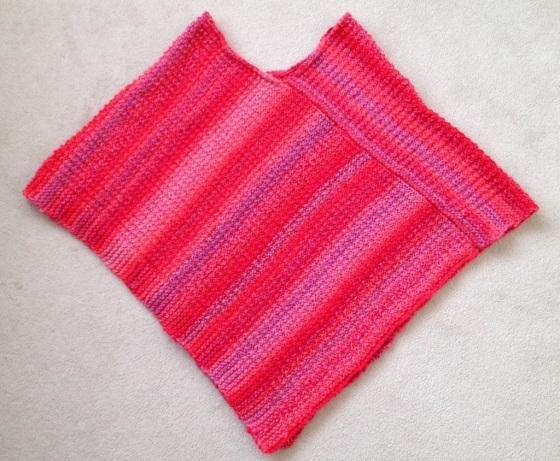 Such a simple beginners design by Bergere de France  – you knit two rectangles and through some clever fixing end up with a cosy poncho. In a way it was a little too simple for me knitting-wise and I must admit it did become known as ‘that stupid poncho’  particularly as halfway through the first piece I decided that it was tiny. I held it up against a very petite lady I know and she thought it was not even going to fit her.  When in Broadstairs, Kent I visited the lovely little yarn shop C Wool (near the beach, geddit?!) and the experienced knitty owner told me that French patterns use a size smaller needles than we, for a denser fabric, and the Italians use a size larger. So poncho take two began with larger sized bamboo needles and quite a lot of sighing.

It used less wool than the pattern stated and is definitely a less dense fabric using larger needles. I’m very happy with it, although it’s not something I’d ever wear out of the house because, as anticipated, it makes me look like an Oompa-Loompa!) 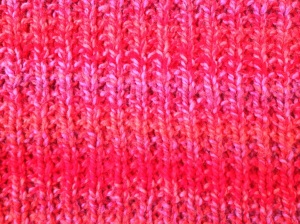 It could be reversible if your seams are invisible I reckon. Mine are *ahem* not – since I couldn’t face sewing them and decided to slip stitch crochet instead. This means they’re a little on the bulky side as I went under the top stitches and the wool is chunky, but that’s fine. If you’re sewing up a long length of knitting you can’t use too much wool at a time as it will tangle, so I could imagine running out and having darned ends to potentially pop out. Crochet it was and fast too.

The diagram was making my eyes roll as I tried, and failed to match up AA with BB, fold GG and HH and stitch it to JJ (ish) but luckily my cousin was here for dinner and a bit of social crafting Thursday. After merely glancing at the pattern, and pushing it to one side, she worked out how to assemble it, fixing the edges together with stitch markers. So I set off with my crochet hook. Although she had her own crochet with her she *somehow* ended up starting to sew the little red jumper for me. It’s gone home with her, and I didn’t even need to provide buttons. This reminds me of the Snow Patrol ‘Chocolate’ lyric” As a child of 25….” And older…Ha ha!

The neckline is as it should be above, but last night I decided it looked a little wide and drafty as the plan is to wear it when it’s chilly and I’m snuggling on the sofa during the winter. This is far less grannyish than pulling a blanket up to my chin, yes? So for the first time in YEARS I picked up stitches around the neckline and knitted a little garter stitch collar. It rolls inwards but actually that works well so I’m happy. 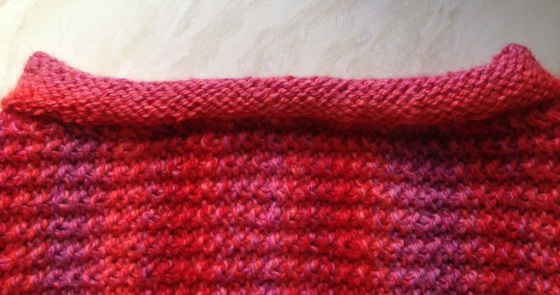 Happy that is apart from the stream of questions asking if I’d like a llama or a sombrero to go with it. Actually I wouldn’t say no to a BIG bottle of tequilla but that’s not materialised.

Here’s a link to some poncho related facts if you’re inclined to look.

Tomorrow a good friend’s coming over. She said that we’re always talking about craft, visiting crafty shops, events and emailing links but apart from the embroidery and jewellery workshops we haven’t actually done any together! So she’s coming here with her s/m, I have mine as Christmas came early for me last Saturday and we’re having a stitchy day together. Very exciting!

Do you have the chance to get crafty this weekend?