Oooh I thought when I saw this shepherd’s hut a while back. I parked and walked back to have a peer at it. Actually it’s only got that tiny little window so wouldn’t be a great craft hideaway, which is probably a good thing as in a nanosecond I was already planning where to park it in the back garden and musing about taking it to the seaside. Mad. And no, that’s not expensive at all. Is it? Ha! 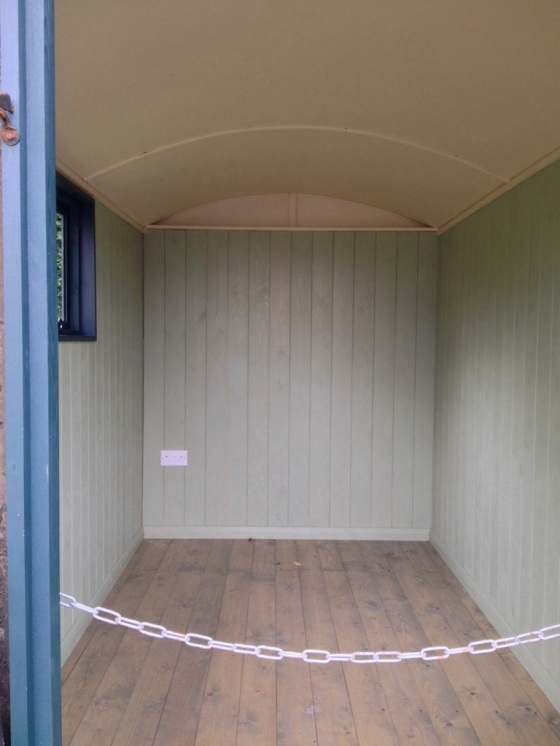 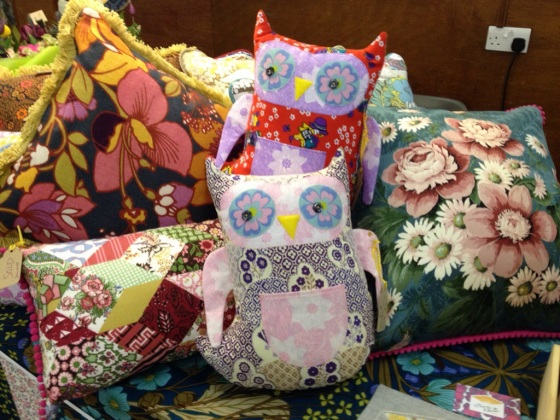 I went to a food and craft fair a few weeks ago with a friend. We were a bit disappointed to find the craft part was really just a few tables with jewellery, homemade cards, decoupage kits although one had these rather lovely vintage fabric owl cushions and things. The food part was redundant as we’d already eaten mystery sausage baps at mine before leaving. Mystery for her as I made her guess the flavours as I chose them from my super local butchers (homemade meaty sausages. Yum) This time they were pork, celery and Stilton. She liked them too.

Tiny confession: The food wasn’t 100% redundant as I bought homemade fudge and I think my friend chose pick ‘n mix. I can’t be sure as my eyes were firmly fixed on my slices of fudge.

We each bought raffle tickets to support the local cause and later she had a call to say there was an arty raffle prize on the way! Lucky duck…not really as it turned out to be an Usborne book on Modern Art, for children. I’m going to give it to my nieces. 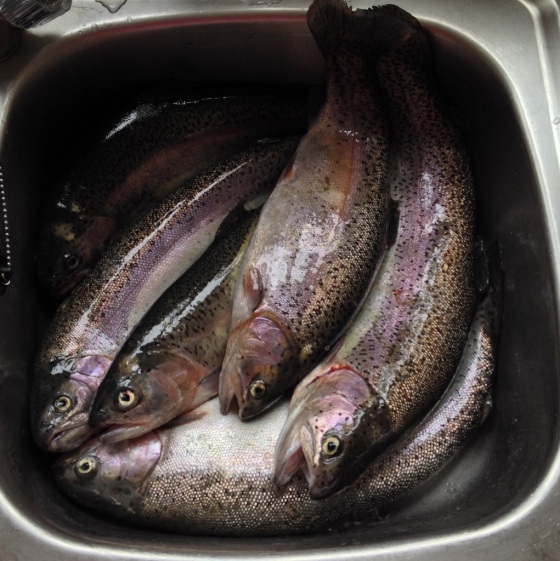 Six rainbow trout freshly caught in a Wiltshire lake. One bartered for cider at the local shop, one to a neighbour, two smoked to be eaten as potted trout or just as they are with salad. Yum. I bought a Fladen home smoker so the fisherman’s experimenting with whisky, hickory and applewood smoking chips. I like the whisky (cask) chips best so far. The other fishes are in the freezer getting in my way as they are solid slightly curled forms so hinder neatly stacking tubs. (Before you leave ‘Urgh’ comments on my behalf about finding trout in the sink, I don’t mind at all. I vacate the kitchen, after opening the window and door then let the cleaning begin. The only issue last Autumn was the windows being left open during the first home smoker test. The house stank of hickory smoke!)
A few days ago the shopkeeper gave us a leg of pork as another thank you for the (unbartered) trout he’s had over the last few years, and the neighbour bought some German Friendship Cake batter around. I love this type of thing!

My Bondaweb finally arrived so I could have a second go at applique. The blue bird was my first go, then I adjusted the stitch and felt happier with the other, though went a bit off track on his head.
This bag is all ready to applique. I fixed the petals on with Bondaweb, at the same time as I prepared the birdie tea towels, but it doesn’t entirely like the canvas. They’re pinned as well now; just in case I find petals on the floor. I might applique them by hand, it depends how I find the thickness of the canvas. The fabric is from a pack of fat quarters I bought from Amazon. It turns out not to be a good idea to buy fabric online, unless it’s a brand you know. It’s very thin. 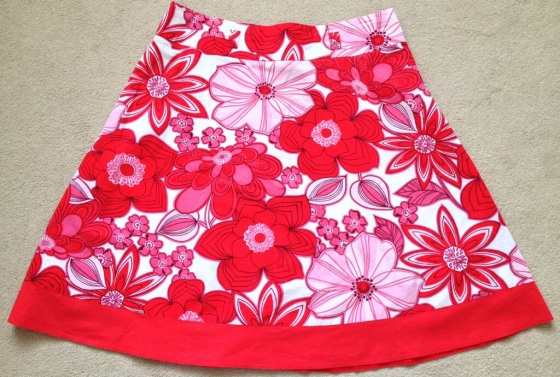 Here’s my unplanned and unexpected find from yesterday. We were mooching around a smallish and not particularly lovely little town we once lived for a year. It was a stick a pin in a map at a halfway point kind of decision then, and it worked. There are so many charity shops now. The vintage style flowers caught my eye, then the 100% cotton label. I bought it purely for the fabric. How about a flowery tote bag for the Summer? It’s thin enough to sew with my little machine, thick enough for shopping or carrying books. It cost £2.95!
I’ve spent several years reading blogs where someone’s visited their local op, thift or charity shop and picked up a real find. Well I think this is mine! 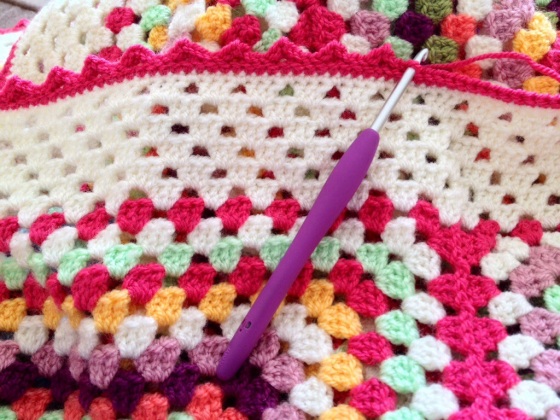 This morning’s crochet for a few minutes. It’s the final edging row, I’m halfway around and then another blanket bites the dust!

The tomato plants getting some sun toughening up outside, jogging on the spot and doing crunches (whatever they are?!) before they go into grow bags. Hopefully we’ll have bowlfuls of red Gardener’s Delight cherry tomatoes and some yellow Golden Sunrise. I need a really good crop as I’m competing with a friend this year. Greenhouses are for sissy tomatoes!!!!

I hope you’ve had a restful Sunday too. If you plan to post your own 10ish Random Things please leave a comment or link below, I’d like to read yours.